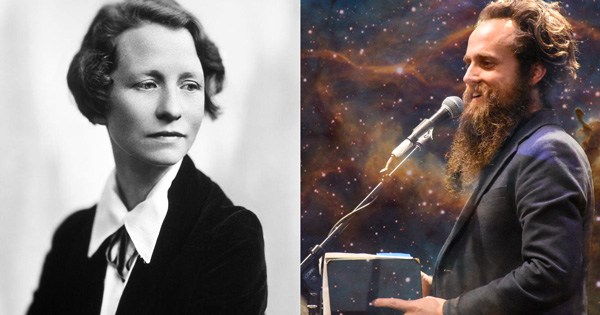 “Euclid’s system,” mathematician Lillian Lieber, of whom Einstein was an admirer, wrote in her brilliant free-verse primer on mathematics and social justice, “has served for many centuries as a model for clear thinking, and has been and still is of the greatest value to the human race.” But more than a beacon of truth, Euclid was also a torchbearer of beauty. In fathering geometry with Euclid’s Elements, one of the most influential scientific texts of all time, he grounded mathematics in the real world — a groundbreaking cross-pollination of truth and beauty that shaped art through science and science through art. By giving rise to the development of perspective, Euclidean geometry invited architecture and the figurative arts into the three-dimensional world for the first time, then through them gave back to science — Galileo’s Moon drawings were so revolutionary in large part because his training in perspective allowed him to depict the topography of its mountains and craters, refuting the old notion that our satellite is a perfectly smooth orb of ethereal matter and revealing it instead to be as solid and rugged as the Earth.

Ralph Waldo Emerson grasped Euclid’s significance when he wrote in his journal:

The problem of the poet is to do the impossible… to unite the wildest freedom with the hardest precision… Dante was free imagination, all wings, yet he wrote like Euclid.

But it was another great poet who most precisely captured Euclid’s supreme and abiding contribution to humanity. Edna St. Vincent Millay (February 22, 1892–October 19, 1950) was twenty-one when she enrolled in Vassar College as a freshman. Immersed in the strong science curriculum established there by pioneering astronomer Maria Mitchell, who had paved the way for women in science in the previous century, Millay composed one of her earliest sonnets as a tribute to Euclid’s legacy of revolutionizing how we look at the world and what we see.

Euclid alone has looked on Beauty bare.
Let all who prate of Beauty hold their peace,
And lay them prone upon the earth and cease
To ponder on themselves, the while they stare
At nothing, intricately drawn nowhere
In shapes of shifting lineage; let geese
Gabble and hiss, but heroes seek release
From dusty bondage into luminous air.
O blinding hour, O holy, terrible day,
When first the shaft into his vision shone
Of light anatomized! Euclid alone
Has looked on Beauty bare. Fortunate they
Who, though once only and then but far away,
Have heard her massive sandal set on stone.

The Universe in Verse — a celebration of science through poetry, which I am hosting in collaboration with Pioneer Works and The Academy of American Poets — returns in April of 2018. For more highlights from the 2017 edition, savor Amanda Palmer’s reading of Neil Gaiman’s feminist poem about science, Janna Levin’s reading of Adrienne Rich’s tribute to women in astronomy, Tracy K. Smith’s ode to the Hubble Space Telescope, Rosanne Cash’s reading of Adrienne Rich’s homage to Marie Curie, Diane Ackerman’s poem about our search for extraterrestrial life, playwright Sarah Jones’s chorus-of-humanity tribute to Jane Goodall, Humans of New York creator Brandon Stanton’s reading of John Updike’s ode to the neutrino, and my reading of Polish Nobel laureate Wisława Szymborska’s ode to the number pi, then watch the complete show for a two-hour poetic serenade to science.