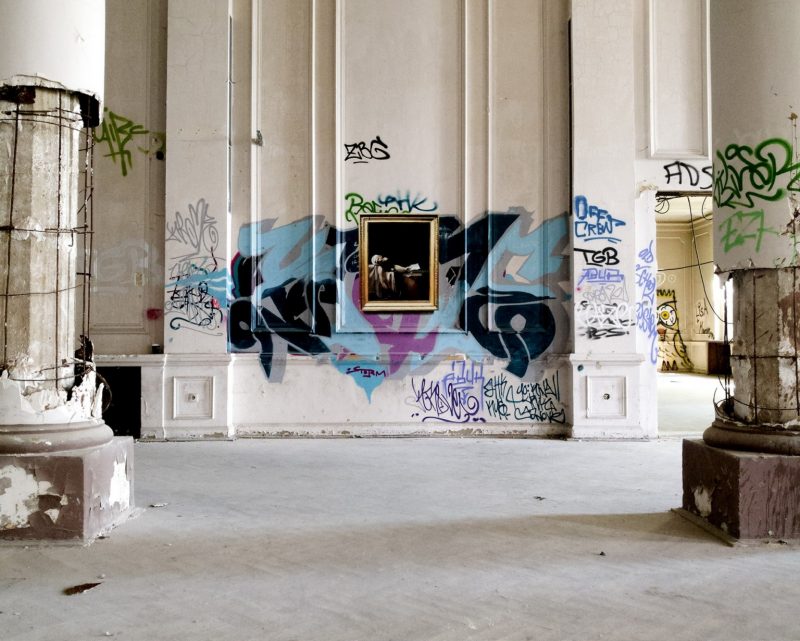 Malaga-based artist Julio Anaya Cabanding paints well-known masterpieces in unsuspecting public places to create captivating trompe l’oeil interventions. The classic scenes and their ornate frames are hand-painted on unlikely backdrops such as graffiti-filled walls, crumbling buildings, and slabs of stones by the sea. These decrepit locations are chosen on purpose, as Anaya Cabanding seeks a distinct contrast to the pristine halls of traditional art museums. “These places are inhospitable, decadent, and inappropriate to receive such a valuable object,” he explains to Colossal. “Opposite of what a museum is.” Anaya Cabanding symbolically “steals” the works of art, presenting them in locations that are abandoned, peripheral, or difficult to access. To create each work he first outlines his replica in spray paint, and then meticulously fills in the details in acrylic paint. The practice evolved from his art education at the University of Fine Arts in Malaga where he developed an interest in site-specific works and traditional trompe l’oeil. It was at the encouragement of his graffiti-writing friend Imon Boy that he first moved his work from the studio to the street. “I really liked the result and the relationship between the trompe l’oeil painting and the environment, so I decided to continue doing that,” he recounts of his initial experience. His interventions are so meticulously rendered that people often think they are Photoshopped, or mistake them for the original paintings. “A year ago I painted two paintings by Lucian Freud… in an exhibition with colleagues from the university,” he says. “When talking to one of their mothers one week later, a colleague realized she still thought she had seen two real paintings.” Recently Anaya Cabanding participated in the Jornadas Z de Montalbáncontemporary art project organized by Rafael Jiménez and Demetrio Salces, in Córdoba, Spain. You can follow the Spanish artist’s uncanny interventions on Instagram.