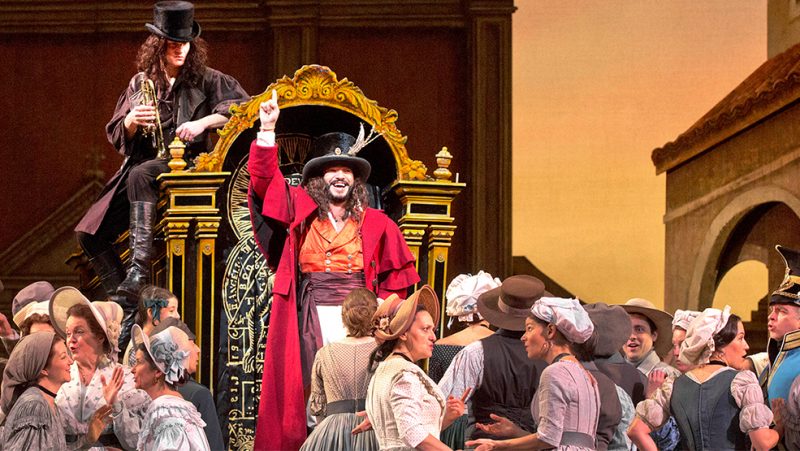 From the Metropolitan Opera of New York Transmitted live on Saturday February 10, 2018 at 19:55

Pretty Yende debuts a new role at the Met with her first Adina opposite Matthew Polenzani, who enthralled Met audiences as Nemorino in 2013 with his ravishing “Una furtiva lagrima.” Bartlett Sher’s production is charming, with deft comedic timing, but also emotionally revealing. Domingo Hindoyan conducts.

Production a gift of The Monteforte Foundation, in honor of Wim Kooyker

Italy, 1836. Nemorino, a young villager, is unhappily in love with the beautiful farm owner Adina, who he thinks is beyond his reach. Adina tells the gathered peasants about the book she is reading—the story of how Tristan won the heart of Iseult by drinking a magic love potion. A regiment of soldiers arrives, led by the pompous Sergeant Belcore, who immediately introduces himself to Adina and asks her to marry him. Adina declares that she is in no hurry to make up her mind but promises to think over the offer. Left alone with Nemorino, Adina tells him that his time would be better spent in town, looking after his sick uncle, than hoping to win her love. She suggests that he do as she does and change affections every single day. Nemorino reminds her that one can never forget one’s first love.

Dr. Dulcamara, a traveling purveyor of patent medicines, arrives in the village advertising a potion capable of curing anything. Nemorino shyly asks him if he sells the elixir of love described in Adina’s book. Dulcamara claims he does, slyly proffering a bottle of simple Bordeaux. He explains that Nemorino will have to wait until the next day—when the doctor will be gone—to see the results Though it costs him his last ducat, Nemorino buys and immediately drinks it.. Nemorino begins to feel the effect of the “potion” and, convinced he will be irresistible to Adina the next day, feigns cheerful indifference towards her. Surprised and hurt, Adina flirts with Belcore. When orders arrive for the sergeant to return immediately to his garrison, Adina agrees to marry him at once. The shocked Nemorino begs her to wait one more day, but she dismisses him and invites the entire village to her wedding. Nemorino desperately calls for the doctor’s help.

At the pre-wedding feast, Adina and Dulcamara entertain the guests with a song. Adina wonders why Nemorino isn’t there. She doesn’t want to sign the marriage contract until he appears. Meanwhile, Nemorino asks Dulcamara for another bottle of the elixir. Since he doesn’t have any money left, the doctor agrees to wait so Nemorino can borrow the cash. Belcore is bewildered that Adina has postponed the wedding. When Nemorino tells him that he needs money right away, the sergeant persuades him to join the army and receive a volunteer bonus. Nemorino buys more elixir and suddenly finds himself besieged by a group of women. Unaware of the news that his uncle has died and left him a fortune, he believes the elixir is finally taking effect. Adina feels responsible for Nemorino’s enlistment, but her concern turns to jealousy when she sees him with the other women. Dulcamara boasts about the power of his elixir and offers to sell Adina some, but she is determined to win Nemorino all on her own.

Nemorino now feels sure that Adina cares for him: He noticed a tear on her cheek when she saw him with the other women. Adina returns to tell Nemorino that she has bought back his enlistment papers. When he again feigns indifference, she finally confesses that she loves him. Belcore appears to find the two embracing and redirects his affections to Giannetta, declaring that thousands of women await him elsewhere. Dulcamara brags to the crowd that his miraculous potion can make people fall in love and even turn poor peasants into millionaires.