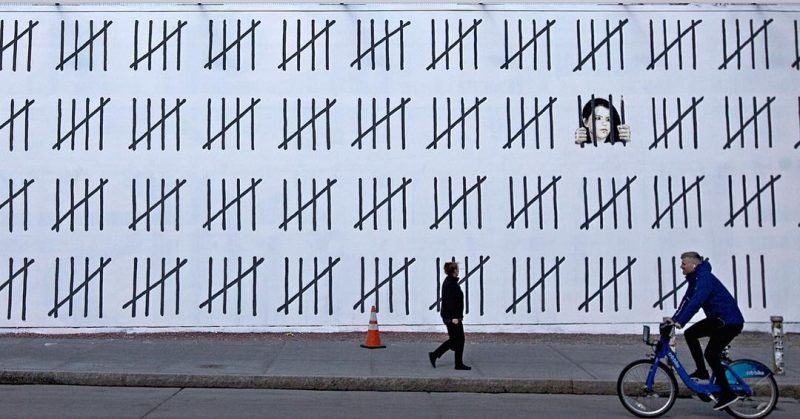 Banksy (previously) has emerged this week on the streets of New York, creating at least two new artworks, his first pieces in the city since his ‘residency’ five years ago. In one large work spanning the length of the famed mural space at the corner of Houston Street and Bowery in Manhattan, tally marks form prison bars, symbolically counting the days of imprisonment for artist Zehra Doğan. The Turkish painter is currently serving a nearly three year prison sentence for the creation of a single painting. The mural is a collaboration between Banksy and street artist Borf.

Doğan, who also worked as a reporter for the now defunct Dicle news agency, created the painting in 2016 which depicts operations carried out by Turkish security forces against the Kurdistan Workers’ Party (PKK). The artwork, derived from a photograph, shows buildings reduced to rubble, plumes of smoke, and gathered military trucks, all part of a multi-year effort in Turkey’s southeastern towns and cities to clear out PKK militants.

The aspect that the Mardin 2nd High Criminal Court deemed a crime are the Turkish flags that Doğan included, draped over the facades of some of the standing buildings, elements that also appear in the original photo.

As a result of her artistic rendering of the destruction in Mardin province Doğan may the only person in the world imprisoned for the act of painting. In Instagram posts about his depiction of Doğan’s sentencing, Banksy is encouraging people to repost her work and tag Turkey’s president, who is also active on Instagram. The photograph that Doğan’s painting is based on