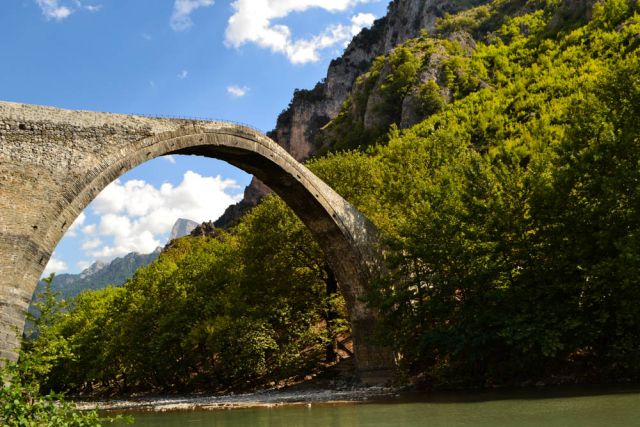 Leaving the port town of Igoumenitsa we face, straight away, the vast foothills of the Pindus range. Mountains lying like the sides of gigantic sleeping dogs, curled up, heads resting on enormous paws. We cut straight into this range to visit a place where we can speak with the dead.

Necromanteion, an ancient Greek temple, housed on a hill looking to the banks of the Acheron River, dedicated to the oracles of the dead who believers would make pilgrimage towards to come and speak to those who had passed to the other side.

In those ancient times, wily priests, having taken their money, would lead the habitués down into the dark crypt, starving them for days, feeding them hallucinogenic plants, bringing them back up into the daylight where, staggered and dazed, the followers would see the dead before them, larger than in life.

The sanctuaries and the black oppressive underground crypt, perhaps over 3,000 years old have been opened up for us to climb down to. The pots where the believers left their dedications stand here, preserved. The man at the modern ticket gate, however, has no trickery in store for me, instead he credulously believes when I answer “yes” to being a student, an oap, unemployed, all three, and waves me in for free.

Having emerged out of the dark crypts, disappointingly with no obvious signal from the dead, we make our way down to the plain we saw from on high and to the Acheron River itself. The river of legend that took souls from this world to Hades and the underworld of the next.

You no longer need the sordid ferryman Charon – foul with grease and eyes of furnaces of fire – to transport you across the river here to the underworld. There are now zipwires and hoardings and boards advertising pony trekking and red and yellow helmeted kayakers and families screamingly splashing in the water. Hell is not down this river. Hell is here.

We head along the bank, up river to get away from painful organised holiday fun, and then past the weekend hippies camping, playing guitars, and after a 20 minutes or so walk we set up a tent ourselves, just above the gushing springs and the cave that opens up towards Hades. The river is clear and frighteningly cold to stand in, the trees hang happily, kingfisher fly, the noise downriver from the crowds slowly ends as the sun dies an apricot tinge, and the river becomes ours.

The local town of Glyki holds no appeal for dinner, with its busy, brightly lit road and tavernas with plasticky pictures of food outside. Instead we take a road up into the hills where there seems to be nothing. Even the nature seems unprepared for outside invasion; birds pecking in the rough road haven’t learnt to fly from our on-coming car, a cat wakes on a wall and looks left, right, left again, utterly outraged at its peace being disturbed. The one taverna in the small village of Choika, looking down again on the plain is full of locals. Good meats, wines, farmers, a family, a priest, a smack of cards, a clatter of backgammon. A world away from the world below.

Early next day we head away from Acheron even higher into the mountains. The road winds us with dramatic, vertiginous views towards Souli, and my travelling companion tells me of a dance she did, and every Greek girl does, at school. The Dance of the Souliotisses.

School girls dance in tribute to the women of Souli who were caught in the Greek-Turkish nineteenth century war. The dance ending with all dancers flinging themselves, and their doll babies, dangerously off from the school stage – copying the heroic mass suicide of the women, who plunged to their deaths off these very mountain tops to avoid the terrors of capture and slavery at the hands of the barbarous Ali Pasha –falling with the song “The women of Souli have learnt how to survive, and they also know how to die…”

I find all this rather moving and, as we approach the top of the climb and a vast expanse of field hemmed in by a ring of huge mountain rock walls, where battle took place between Greeks and Turks, there is an eerie silence. Despite now a bloodless, gentle peace sitting pleasantly heavy over these spread green fields, I can still hear the hills reverberating with ancient gun shot. More than so many places, maybe due to the lack of other people and the all prevailing quiet, you feel here really what has happened under these skies. Statues sit solemnly to the Greek resistance heroes Botsaris and Tzavelas.

I am, however, desperate for a pee and so cheered to find the completely deserted but brilliantly maintained memorial has lavatories. I can’t help but feel though, as I squat, that the choice of Turkish toilet is a final insult in this particular place of tragic loss and ruination.

We descend one side of these Souli mountains and freewheel down into the town of Dodona.

See more at World of Kemp