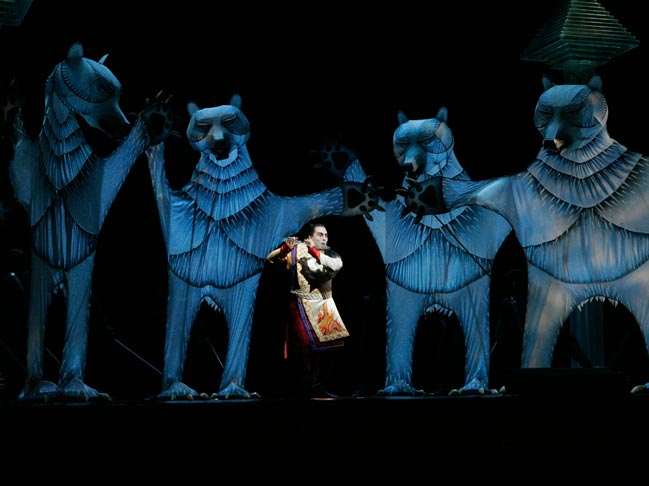 A mythical land between the sun and the moon. Prince Tamino flees a terrible serpent before three ladies in the service of the Queen of the Night save him. After they have left, the bird catcher Papageno appears. He explains that the Queen’s ladies give him food and drink in return for his birds. Then, he claims that it was he who killed the serpent. Hearing Papageno take credit for their work, the ladies return and padlock Papageno’s mouth shut for lying. Turning to Tamino, they give the prince a portrait of the Queen’s daughter, Pamina, who they say is being held prisoner by the evil Sarastro. Tamino falls in love with Pamina’s portrait at first sight. The Queen appears. She grieves over the loss of her daughter and asks Tamino to rescue Pamina. The ladies offer Tamino a magic flute to ensure his safety on the journey, and to Papageno, who will accompany him, they give magic silver bells. Finally, the ladies summon three spirits to guide the men on their journey.

In Sarastro’s palace, the slave Monostatos pursues Pamina, but he is frightened away when Papageno arrives. The bird catcher tells Pamina that Tamino loves her and is on his way to save her.

Led to Sarastro’s temple, Tamino learns from a priest that it is the Queen who is evil, not Sarastro, and that Pamina is safe. He plays on his flute, charming the animals with the music and hoping that it will lead Pamina to him. When he hears the sound of Papageno’s pipes, he rushes off to follow it. Monostatos and his men chase Papageno and Pamina, but the sound of Papageno’s magic bells renders them helpless. Sarastro, entering in ceremony, promises Pamina eventual freedom and punishes Monostatos. Pamina and Tamino are enchanted with each other, but soon the priests separate them to maintain their purity.

Within the temple’s inner sanctum, Sarastro tells the priests that Tamino will undergo initiation rites.

Papageno and Tamino are sworn to silence. The three ladies appear and have no trouble derailing Papageno from his course of virtue, but Tamino remains firm.

In a garden courtyard, Monostatos tries to kiss the sleeping Pamina but hides when the Queen of the Night arrives. She gives her daughter a dagger and orders her to murder Sarastro. When Monostatos finds Pamina alone in tears, he forces himself upon her. Sarastro intervenes, consoling Pamina and explaining that he does not seek vengeance against her mother.

Inside the temple, Papageno is quick to break a new oath of fasting and jokes with a flirtatious old lady, who vanishes when he asks for her name. Tamino remains steadfast, even to the point of breaking Pamina’s heart—she cannot understand his silence.

The priests inform Tamino that he has only two more trials to complete his initiation. Papageno, who has broken his oath, is eliminated from the trials. Pleading for a wife, he eventually settles for the old lady. When he promises to be faithful to her, she turns into a young maiden named Papagena but immediately disappears.

In one of the temple’s gardens, Pamina despairs over Tamino’s apparent indifference and contemplates suicide. Before she can take her life, the three spirits intervene to save her.

As Tamino prepares for the final trials, Pamina runs in. Together, they face the ordeals of fire and water, protected by the magic flute.

On a hillside, Papageno dejectedly resolves to hang himself. The spirits arrive just in time and remind him that if he uses his magic bells, he will find true happiness. When he plays the bells, Papagena appears, and the two are united.

At the entrance to the Temple of the Sun, the Queen of the Night, her three ladies, and Monostatos prepare to attack but are defeated and banished. Sarastro joins Pamina and Tamino as the brotherhood praises the gods and the triumph of courage, virtue, and wisdom.