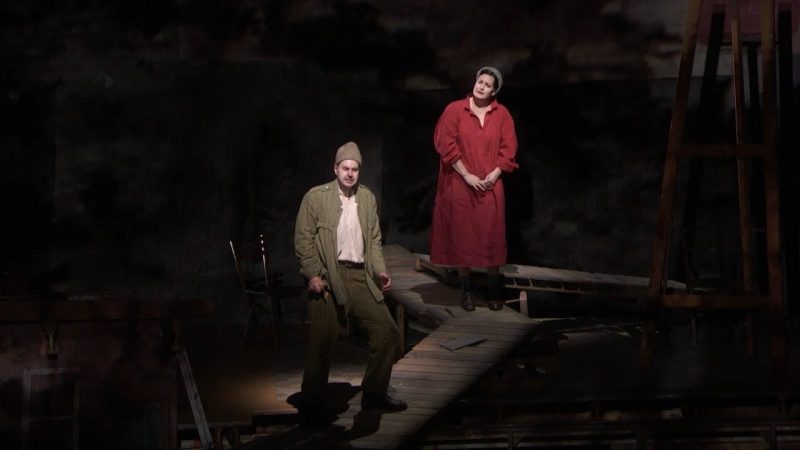 From the Metropolitan Opera of New York Transmitted live on Saturday January 11, 2020 at 20:00

After wowing audiences with his astounding production of Lulu in 2015, South African artist William Kentridge now focuses his extraordinary visual imagination on Berg’s other operatic masterpiece, set in an apocalyptic pre–World War I environment. Met Music Director Yannick Nézet-Séguin is on the podium for this important event, with baritone Peter Mattei making his highly anticipated role debut as the title character. Soprano Elza van den Heever is Wozzeck’s unfaithful mate, and the commanding cast also includes tenor Christopher Ventris as the Drum-Major, bass-baritone Christian Van Horn as the Doctor, and tenor Gerhard Siegel as the Captain.

The soldier Wozzeck is shaving the Captain. The officer urges him to work more slowly, then tells him that he is a good man but lacks morality because he has an illegitimate child. Wozzeck replies that virtue is a luxury not meant for the poor.

Wozzeck and a fellow soldier, Andres, are cutting firewood in the fields. Wozzeck is frightened by visions: he hears noises and imagines the sinking sun as a fire setting the earth aflame. Then suddenly all is quiet.

Marie, the mother of Wozzeck’s child, and her neighbor Margret watch a military band pass by outside their window. Marie admires the handsome Drum Major and Margret mocks her. Alone with her young son, Marie sings him a lullaby. Wozzeck arrives and tells her about his visions, which he sees as an omen of evil things to come. Marie tries to comfort him, but he rushes off to the barracks without looking at his son. Overwhelmed by her own fears, Marie runs out of the room, leaving the child.

Wozzeck visits the Doctor, who pays him for use in his pseudo-scientific research. Full of self-delusion about making a grand scientific discovery, the Doctor asks Wozzeck about his diet. Wozzeck again brings up his visions, which the doctor dismisses as mere imagination.

On the street before her door, the Drum Major makes advances toward Marie.

She resists at first, then gives in to him.

Marie is admiring the earrings the Drum Major has given her. When Wozzeck enters, she tries to hide them, then claims she found them in the street. Wozzeck is suspicious. He gives her the money he has earned and leaves. Marie is overwhelmed by remorse.

The Captain and the Doctor meet in the street and talk morbidly of sickness and death. When Wozzeck passes by, they taunt him with allusions to Marie’s infidelity. Shocked, Wozzeck asks them not to make fun of the one thing in the world that is his. Then he rushes off.

Wozzeck confronts Marie with his suspicions and tries to force her to confess. He is about to hit her but she remains defiant, telling him that she’d rather have a knife in her belly than his hand on her.

Two drunken apprentices amuse the crowd in a beer garden. Wozzeck enters and sees Marie and the Drum Major on the dance floor. A fool approaches Wozzeck and tells him he smells blood. Wozzeck has a vision of people waltzing while covered with blood.

The same evening in the barracks, Wozzeck wakes to nightmarish memories of what happened in the beer garden. The Drum Major enters, drunk, and boasts about his conquest. The two men fight and Wozzeck is knocked down.

Alone with her child, Marie reads from the Bible, first about the adulteress who was forgiven, then about Mary Magdalene. She begs God for mercy.

Marie and Wozzeck are walking together near a pond. Marie wants to hurry back to town, but Wozzeck makes her sit with him. He kisses her and makes ironic remarks about her fidelity. When she attempts to escape, he draws a knife and kills her.

Wozzeck is drinking in a tavern, shouting wildly, and dancing with Margret. When she notices blood on his arm, he is unable to explain where it has come from and rushes out.

At the pond, Wozzeck searches for the knife and throws it into the water. Suddenly he imagines that the moon will reveal his crime. He wades farther into the water to hide the knife in a safer place and to wash the blood off his hands. The Doctor and Captain, passing by, hear him drown.

Neighbor children playing in the street tell Marie’s son that his mother is dead. He does not understand and keeps singing and playing.