ΑρχικήNews in EnglishTrees Grow from Bricks and a Storefront on the... 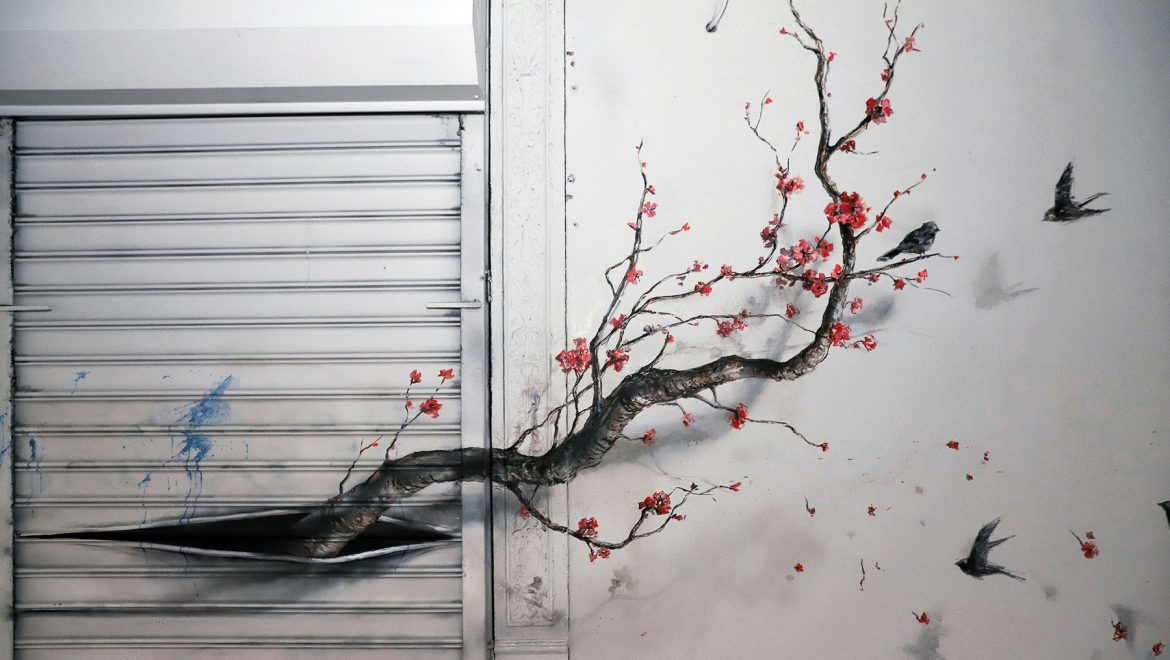 Elusive Spanish artist Pejac (previously) travels the world creating street interventions, often integrating natural elements into man-made structures through a combination of stenciling and trompe l’oeil painting. His most recent projects have brought him to New York City for the first time, where he has created two arboreal artworks in Bushwick and Chinatown.

Pejac formed Fossil, in Brooklyn’s Bushwick neighborhood, using a brick-sized stencil to spray paint carefully placed shadows on a brick wall. This illusion of bricks sinking back and surging forward  creates a pixelated tree. Chinatown’s Inner Strength is fully hand-painted, depicting a cherry blossom branch growing out of a security gate and surrounding by flying swallows. Pejac, who often addresses humanity’s fraught relationship to the natural world, describes his newest artworks to Colossal:

Taking a sturdy structure and familiar urban element as a base, Fossil is proposing a hypothetical fatal future in which the only memory of nature is the fossilized appearance of a tree on a brick wall. Opposing the first work, Inner Strength is an empowering piece portraying another hypothetical future in which nature breaks the barriers imposed by the hand of man, recovering the lost ground along the way.

In addition to his outdoor work, Pejac occasionally creates editioned prints using a variety of techniques ranging from lithography to screenprinting. You can follow the artist’s travels on Instagram and Facebook. For those in New York, Fossil is located at 27 Scott Avenue in Brooklyn, and Inner Strength can be found at 2 Henry Street in Manhattan.