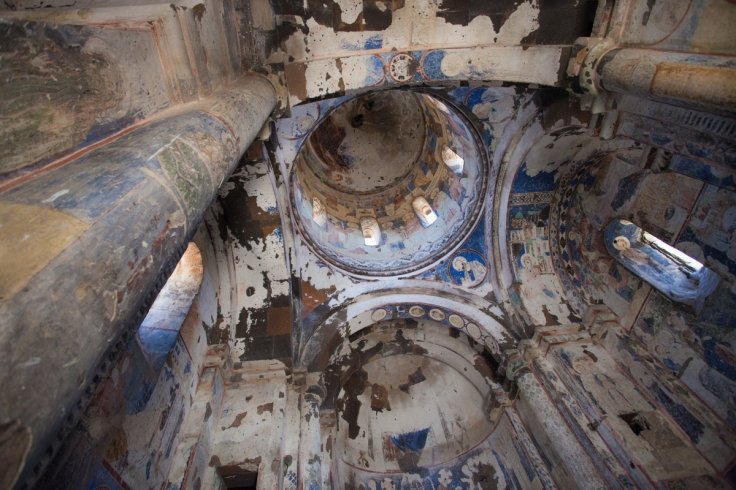 A 1,500-year-old underground Byzantine church has been discovered in Turkey with unseen before frescoes depicting Jesus.

The church was found in the world’s largest known underground city in the Cappadocia region of central Turkey.

The frescoes have been described as depicting Jesus rising into the sky, what the Bible calls the Ascension. There are also ones showing Jesus destroying evil in the Final Judgement. Other frescoes depict the apostles, saints and prophets.

Archaeologists suggest the church could be more than 1,500 years old and that it still holds many secrets that can be revealed, as only the roof and the uppermost parts of the wall have been uncovered.

The discovery was made during the raising of an urban housing project in the city of Nevşehir.

“We know that such frescoes have so far never been seen in any other church,” said Hasan Ünver, mayor of Nevşehir. “It was built underground and has original frescoes that have survived to this day. This place is even bigger than the other historical churches in Cappadocia.”

“It is reported that some of the frescoes here are unique. There are exciting depictions like fish falling from the hand of Jesus Christ, him rising up into the sky, and the bad souls being killed. When the church is completely revealed, Cappadocia could become an even bigger pilgrimage center of Orthodoxy,”Ünver said.

Excavations will continue in the spring. When it was first discovered, the church was filled with earth, and pieces of the paintings had to be collected separately. Lead researcher of the church and underground city, Semih İstanbulluoğlu, said: “The structure was found a short time ago. The frescoes on the walls will return to their original look after restoration and cleaning work.”

20 ways to fall in love with Lefkada