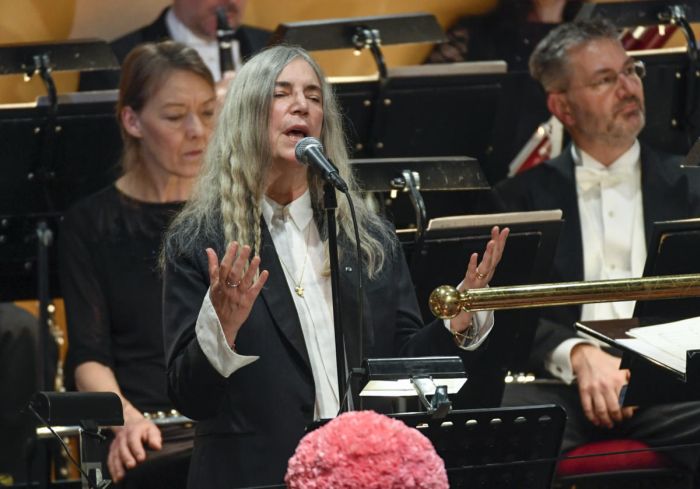 At Saturday morning’s Nobel Prize ceremony in Stockholm, after the Swedish royal anthem was played, Carl-Henrik Heldin, the chairman of the board of the Nobel Foundation, delivered a brief speech to the collected laureates and guests. King Carl XVI Gustaf, his wife, Queen Silvia, and their daughter, Crown Princess Victoria, had assembled behind him, bedecked in gloriously elaborate, heavily festooned ensembles. The air was rarified. Onstage, things were glinting. “In times like these, the Nobel Prize is important,” Heldin said. What he meant by the phrase “times like these”—that our days were dark—seemed immediately evident to everyone in the room. “Alfred Nobel wanted to reward those who have conferred the greatest benefit to mankind.”

This remains such a beautiful, generous mandate. Theoretically, the Nobel Foundation’s mission is expansive in scope, but it’s profoundly simple, too: Whose work has best improved the world we share? In the months leading up to the ceremony, there was copious chatter about the recipient of this year’s award for literature, the American musician Bob Dylan. Did Dylan deserve it? Are his songs in fact a kind of literature? Are any songs a kind of literature? Can a lyric be successfully untangled from a melody? Can a piece of music be distilled into its constituent parts? At the beginning of “Sympathy for the Devil,” when Mick Jagger belches that first, frantic “Yow!”—is that language? What about Blind Willie Johnson, mumbling his way through “Dark Was the Night, Cold Was the Ground”—his woeful, gravid moaning, is that poetry? Are those words? Is what Dylan has done fundamentally comparable to what William Faulkner or Doris Lessing or V. S. Naipaul has done? Who knows?

The choice incited plenty of pearl clutching across the globe—people were miffed by the idea of a (supposedly) low art receiving validation by a group as historically highminded and discerning as the Nobel Prize Committee. And besides, couldn’t a more obscure, non-Western author have been granted this colossal boost? Of course, critics have been bickering about Dylan’s academic bona fides since at least 1965, when Time published an entire treatise on the question of whether Dylan was “the literary voice of our time and a poet of high degree” (the best quote in the article came from sweet old W. H. Auden, who merely offered this: “I am afraid I don’t know his work at all.”)

Following the announcement, Dylan refused to publicly acknowledge receipt of the prize—a continuation, perhaps, of his willfully and delightfully obtuse approach to fame and accolades. Maybe it was a meta-commentary on the absurdity of institutional affirmations of art. It felt consistent, at least, with Dylan’s own self-mythologizing. And it’s that narrative, after all—the one Dylan has written for himself—that’s perhaps literature in the truest sense. He is his most dynamic creation.

After the presentation of the Nobel Prize in Medicine, to Yoshinori Ohsumi, the Royal Stockholm Philharmonic Orchestra played Jean Sibelius’s “Serenade,” from “King Christian II Suite.” The measured Swedish commentator who was delivering a polite play-by-play of the proceedings introduced the punk-rock singer Patti Smith by saying, “Soon we will hear music of a different kind. Something that a lot of people probably have heard before.” Any haughtiness was surely inadvertent, but there it was: prepare yourselves for a shift toward the popular. Every yahoo on the street knows this one!

Smith was accompanied by the Philharmonic performing a spare and gentle arrangement of Dylan’s “A Hard Rain’s A-Gonna Fall,” orchestrated by Hans Ek, a Swedish conductor. She looked so striking: elegant and calm in a navy blazer and a white collared shirt, her long, silver hair hanging in loose waves, hugging her cheekbones. I started crying almost immediately. She forgot the words to the second verse—or at least became too overwhelmed to voice them—and asked to begin the section again. I cried more. “I’m sorry, I’m so nervous,” Smith admitted. The orchestra obliged. The entire performance felt like a fierce and instantaneous corrective to “times like these”—a reiteration of the deep, overwhelming, and practical utility of art to combat pain. In that moment, the mission of the Nobel transcended any of its individual recipients. How plainly glorious to celebrate this work.

The second verse, the one Smith paused on, describes a dystopian nightmare state, a landscape ravaged by a surreal despair:

Dylan wrote the song in the summer of 1962, for his second album, “The Freewheelin’ Bob Dylan.” He has said it was inspired, structurally, by seventeenth-century balladry: a question is posed, and answers stack up, though none are particularly comforting. It’s the questioning, though—and, moreover, the accounting it inspires—that seems essential. Who hasn’t, in a moment of true desperation or fear, surveyed our world and found only ugliness? Dylan’s intelligence is often antagonistic—his instinct is to seethe—but here, he seems to be encouraging his listeners to shore each other up, to acknowledge the darkness and to bear it.

That Dylan ultimately accepted the Nobel with a folk song (and this specific folk song, performed by a surrogate, a peer) seemed to communicate something significant about how and what he considers his own work (musical, chiefly), and the fluid, unsteady nature of balladry itself—both the ways in which old songs are fairly reclaimed by new performers, and how their meanings change with time. Before Smith took the stage, Horace Engdahl, a literary historian and critic, dismissed any controversy over Dylan’s win, saying the decision “seemed daring only beforehand, and already seems obvious.” He spoke of Dylan’s “sweet nothings and cruel jokes,” and his capacity for fusing “the languages of the streets and the Bible.” In the past, he reminded us, all poetry was song.

Has Dylan conferred great benefit to mankind? Listening to Smith sing his song—and watching as audience members, dressed in their finest, wiped their eyes, blindly reached for each other, seemed unable to exhale—the answer felt obvious. The answer was on their faces.