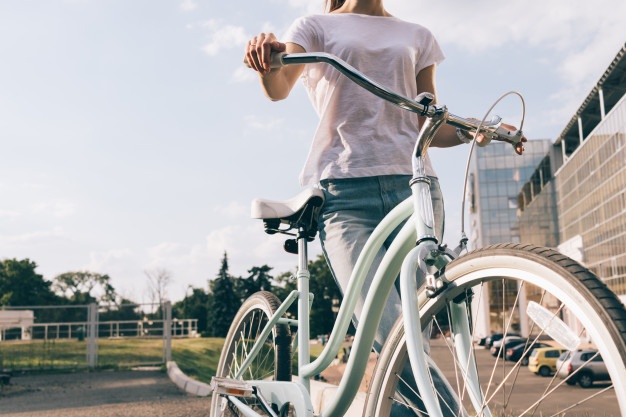 It’s no Amsterdam, but the City of Light is catching up.

When Lone Andersen lived in Paris in the 1980s, she says she saw “almost no cyclists. I saw one once and I almost felt that I should take a picture.” Despite the fact that France’s most iconic athletic symbol is a bike race, its capital city has never been known as a biking mecca the way Amsterdam or Copenhagen are.

That’s according to counts by digital meters set up at 56 sites around Paris to monitor biking. The Copenhagenize index, a comprehensive assessment of bike-friendliness, gives the French capital high marks for adding exclusive bike lanes and pushing bike sharing. But this year’s index says that with a paltry 5 percent of its commuters biking, Paris is a long way from catching up to Copenhagen’s 62 percent.

What could account for the explosion? Paris officials told local media that vélotaf — slang for bike commuting — is a big reason for the increase, while Najdovski touts the city’s plan vélo, or bike plan. The plan has realized amenities like the new two-way cycling path along the Seine’s Left Bank, running 1.5 miles from the Quai d’Orsay in the central city to Alma Bridge. It’s among nearly 200 extra miles of bike paths and lanes in the 2015 plan, along with a $780 million bike-sharing system — one that has admittedly been beset by delays and malfunctions.

If you ask longtime Parisian cycling campaigner and municipal cycling adviser Isabelle Lesens, those new commuters aren’t switching from cars. “It’s very well known that people living in Paris are really fed up with the subway because it’s absolutely crowded,” she says. “So when they discovered it could be possible to go by bike, they tried it.” That incentive can only grow with each public transit strike, like the one this week.

And while more liberal municipal governments vow to accommodate cyclists, even more conservative politicians are jumping on the two-wheeled bandwagon, Lesens says, because of the proliferation of app-based bike sharing. They’ve made it possible to be simultaneously bike-friendly and pro-business, while “nobody dares to be opposed to cycling because of the climate problems,” Lesens explains.

Still, Paris’ Socialist mayor, Anne Hidalgo, is taking heat in local media for failing to put the mettle to the pedal after completing less than a quarter of the 43 miles of bike pistes separated from cars by curbs that she’d promised in 2015.

Nevertheless, Hidalgo’s determination to “turn Paris into a global cycling capital” seems to be working. In 2013, Paris was ranked 19th on the Copenhagenize index’s list of best cycling cities. This year it’s ranked eighth. Hidalgo has also famously declared war on the electric scooters ubiquitous in the French capital, setting new rules to regulate the machines that riders often abandon in bike lanes.

Cycling in Paris isn’t for everyone, even those who are fit enough to stay balanced and keep pedaling. Frank Andrews, a 26-year-old journalism graduate student, grew up in London and calls the two cities’ biking environments “kind of comically different.”

Back in England, there are rules: “Most of my friends and myself have been fined for running lights,” Andrews says. Not so in Paris, where “it’s a bit survival of the fittest out on those streets.”

It’s easy to see how Andrews, a resident of the 6th Arrondissement, can hold his own on les rues moyennes, commuting with an expensive fixed-wheel bike like ones used in velodromes. Brakes are his only concession to convenience.

Andrews attributes the ridership growth to delivery services and “Uberized” cycling via sharing apps. As for the latter, Andrews sniffs, “I feel like I see them more on their sides, discarded on a bridge.”

And Andersen, now a traffic engineer in Copenhagen, says her more recent forays onto Paris streets haven’t been encouraging: “I have never felt an urge to ride a bike in Paris — simply because I think it is too dangerous.” In April, the prefecture of police released figures indicating bike accidents had increased about 12.5 percent over the previous year, with 147 cyclists hurt (though none killed) in three months.

What the city needs, she believes, is more lanes with solid curb separating bikes from motorized vehicles. “If the infrastructure isn’t there, you will not get people to [cycle] on a large scale because they don’t feel safe,” she says.

The more Paris is willing to sacrifice space occupied by its Citroëns and Peugeots, Andersen adds, the more it’ll be able to coax even the faint of heart to pedal onto the city’s grand boulevards.