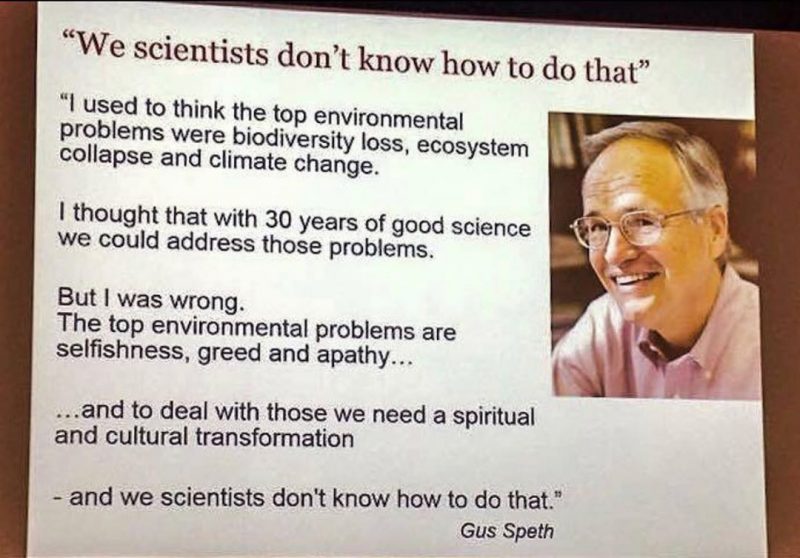 Behind all environmental problems that society faces, whatever time period one analyzes, wherever one can go and whatever one can do, there is going to be greed, envy, ambition, selfishness, apathy and those are moral and spiritual issues. Nonetheless, it is usually scientists who are expected to find a solution, but men flaws are not amongst the expertise of the environmental science field. Gus Speth, who helped found the Natural Resources Defense Council and was dean of the Yale School of Forestry and Environmental Studies, told a British radio presenter in 2013:

“I used to think that top global environmental problems were biodiversity loss, ecosystem collapse, and climate change. I thought that with 30 years of good science we could address these problems, but I was wrong. The top environmental problems are selfishness, greed, and apathy, and to deal with these we need a spiritual and cultural transformation. And we scientists don’t know how to do that.”

Science and religion do not like to hold hands, but finding and establishing a positive nexus between faith and environmentalism will result in a powerful conjunction of forces against Climate Change, our most complex challenge ever faced.

Pope Francis says, in his Encyclical Laudato Si: On Care for our Common Home that although science and religion possess “distinctive approaches to understanding reality, [they] can enter into an intense dialogue fruitful for both”. He continues, stating that the solutions to such complex ecological crisis and its multiple causes will not come from only one interpretation of reality. Similarly, E. O. Wilson in his book “The Creation: An Appeal to Save Life on Earth”, states: “Religion and science are the two most powerful forces in the world today”.

But despite both the religious leader and the secular humanist aforementioned sharing essentially the same ideas, many Christians do not believe Climate Change is endangering our society. The Public Religion Research Institute (PPRI) and the American Academy of Religion (AAR) created and applied the Climate Change Concern Index in a survey, in 2014. This index is based on two questions: whether respondents perceived climate change to be a crisis and whether respondents believed climate change would negatively affect them personally (you can know more about AAR and read their whole report here). The graphic below shows the alarming discrimination of the Climate Change Index by religious affiliation. The International Union for the Conservation of Nature and Natural Resources (IUCN) meets every four years. Last year (2016) the World Conservation Congress was held in Honolulu, Hawaii. The congress already showed the importance of such necessary shift by including a ‘Spirituality Journey’ in the program, for the first time. At the opening ceremony, ‘Our heavenly Father’ was thanked for his ‘Creation.’ Peter Harris, who established and runs A Rocha, a Christian conservation organization, was in the congress and wrote about why conservation is a gospel issue. He analyzed that though many conservation professionals and scientists have a living Christian faith, integrating it into their working lives can be a real challenge. “They work with paradigms and language, such as ‘natural resource management’ or ‘ecosystem services,’ that took shape before the days of Christian involvement.”

A Rocha is a Christian organization that engages communities in nature conservation and works in cooperation with other organizations and individuals who share their commitment to a sustainable world. The organization is cross-cultural, drawing on the insights and skills of people from the 22 countries where it works. It was the only Christian organization present in the IUCN congress. Trying to bring Christians into the conservation conversation, however, will also expose their lack of involvement in environmental issues, which Peter Harris named as “uncomfortable truths.”

Among Christians, there has to be more education related to Climate Change. The Report on Faith and Ecology made by the Interfaith Center for Sustainable Development in 2015 revealed that just over one-third of Americans say their clergy leaders speak about climate change often (11%) or sometimes (25%). More than 6-in-10 Americans say their clergy leaders rarely (29%) or never (33%) reference climate change. Therefore the most effective way to create awareness among Jesus followers is to have its leaders bring the subject to the pulpits. The low incidence of American clergy teaching on climate change is reflected in how American citizens view the issue of climate change: not as a moral or religious issue, according to a recent Yale-George Mason poll. E.O. Wilson, again, throws an interesting insight on these matters. He says “if religion and science could be united on the common ground of biological conservation, the [environmental] problem would soon be solved.”

Since there is a need for Christians to get involved in environmental issues and interrelating them with their faith, here are some practical actions anyone could start doing right now.

If you have ever heard the sentence “Think global, act local”, it says it all. Practice recycling at home and, even if there is no collection in your house or apartment, you can usually find a drop-off recyclable site nearby. Also value local products, by buying at the farmer’s market or considering locally made items as Christmas gifts, for example.

Caring about creation is stated in the Bible, in Genesis 2.15. Bringing the topic up for discussions or talking about it with the leadership of your religious organization could have a positive impact in your faith community.

Participating in organizations such as A Rocha, getting involved in a Community Garden or any organization that serves your community is a great way to care for the people around you, therefore caring about the environment as well.

Nothing will send a message more effectively than our actions. Wherever you work, study or practice your faith, have attitudes that show your care for the creation. That would take us back to number one!

In summary, Christian restoration and redemption beliefs have the potential to advance conversations about sustainability, by highlighting concrete practices that might enable a societal transition regarding ecological health and sustainability. On the other hand, Science knowledge can move Christian ethics beyond the tendency to focus only on a one-sided thinking about nature, towards a reflection on what constitutes right or good actions, in relation to Earth.