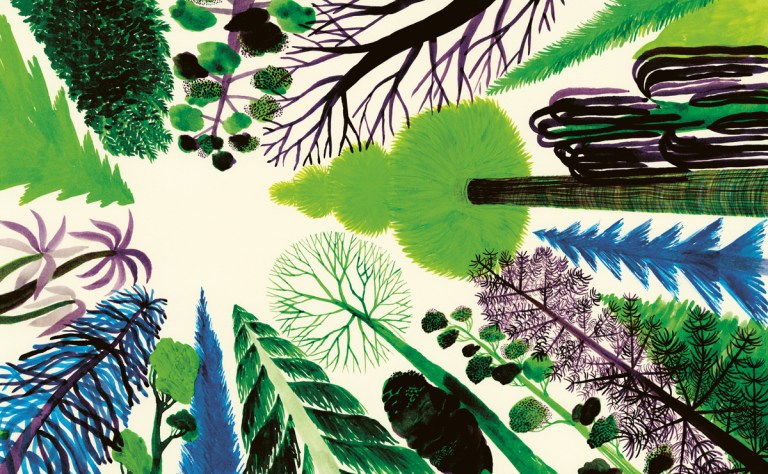 “It is said that the forest has a certain limit if you look straight ahead, but the sides are boundless.”

“When we have learned how to listen to trees,” Hermann Hesse wrote in his lyrical love letter to our arboreal companions, “then the brevity and the quickness and the childlike hastiness of our thoughts achieve an incomparable joy.” When Walt Whitman beheld the singular wisdom of trees, he saw in them qualities “almost emotional, palpably artistic, heroic.” Philosopher Martin Buber insisted that trees can teach us to see others as they truly are.

Indeed, whatever the splendor, wisdom, and heroism of trees may be, it stems from the individual’s orientation to the whole — not only as an existential metaphor, but as a biological reality as science is uncovering the remarkable communication systemvia which trees feel and communicate with one another. Biologist David George Haskell recognized this in his poetic expedition to a dozen of the world’s most unusual trees: “The forest is not a collection of entities [but] a place entirely made from strands of relationship.”

That relational, existential mesmerism is what Italian author Riccardo Bozziexplores in The Forest (public library), illustrated by Violeta Lopíz and Valerio Vidali, and translated from the Italian by Debbie Bibo. Less a book than a tactile expedition into the existential wilderness, the journey unfolds across time and space, in “an enormous, ancient forest that has not yet been fully explored.”

The illustrations, minimalist yet luscious, peek through die-cuts and stretch across gatefolds, emulating the way one lovely thing becomes another when you look closely at nature with generous attentiveness to life at all scales.

Constructed in the tradition of Japanese binding, the book is wrapped in translucent velum that gives the lush cover illustration the aura of a mist-enveloped forest early in the morning.

The story begins when the forest is young — little more than a grove of small trees. With each page, it grows thicker and thicker, more impenetrable and more fascinating at the same time. We see the silhouettes of the explorers — white shadows cast of negative space against the vibrant forest — trek and kneel “to investigate its beauties and its dangers.”

It is said that the forest has a certain limit if you look straight ahead, but the sides are boundless. Here is where the explorers can venture with enjoyment and curiosity.

As the forest grows, so does the explorer: Rising out of the crisp-white page are the subtly embossed faces of different genders and races, also progressing along the way of life — an infant, an adolescent boy, a young woman, an old man.

The vibrant forest and its creatures peeking through the die-cut eyes of the barely visible faces remind us that the human role in nature is not that of conqueror or king but of humble witness and passing visitor — an awareness that calls to mind the founding ethos of the landmark 1964 Wilderness Act, poetically phrased by the naturalist and conservationist Mardy Murie: “A wilderness, in contrast with those areas where man and his own works dominate the landscape, is hereby recognized as an area where the earth and its community of life are untrammeled by man, where man himself is a visitor who does not remain.”

Complement The Forest, which comes from Brooklyn-based independent powerhouse Enchanted Lion Books, with I Saw a Peacock with a Fiery Tail — a very different die-cut masterpiece, reimagining a 17th-century British poem in Indian tribal art — and Annie Dillard on what mangrove trees can teach us about the human search for meaning, then revisit other Enchanted Lion treasures: Cry, Heart, But Never Break, Big Wolf & Little Wolf, The Lion and the Bird, This Is a Poem That Heals Fish, Bertolt, and Be Still, Life.