The Five Invitations: Zen Hospice project co-founder Frank Ostaseski on Love, Death, and the Essential habits of mind for a meaningful life 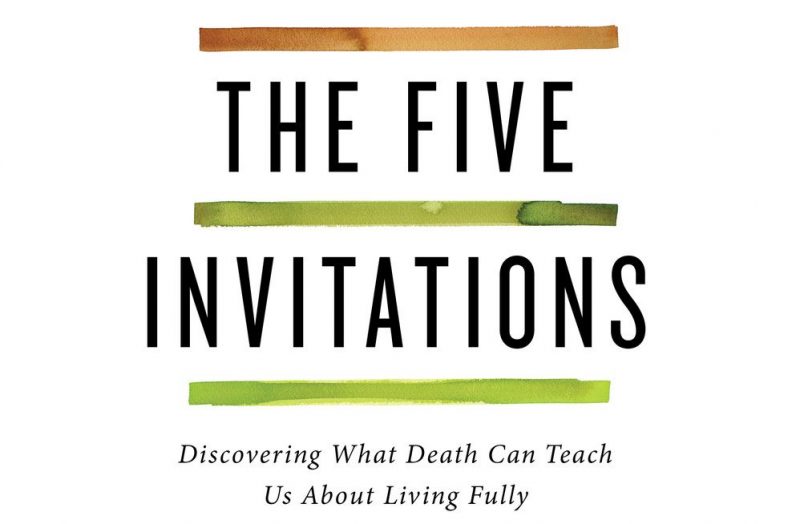 “The sort of fearless openness required to turn toward our suffering is only possible within the spacious receptivity of love.”

“It is the most supremely interesting moment in life, the only one in fact when living seems life,” wrote Alice James, the brilliant and terminally ill sister of Henry James and William James, as she reflected on how to live fully while dying. (We are, after all, always dying.) “Death is our friend precisely because it brings us into absolute and passionate presence with all that is here, that is natural, that is love,” Rilke wrote a generation later from the height of life.

This notion that death grants us a most singular and intimate perspective on life, much as love does, is what Zen Hospice Project co-founder Frank Ostaseski explores in The Five Invitations: Discovering What Death Can Teach Us About Living Fully (public library) — a celebration of how the recognition that death comes to each of us, a recognition at once consolatory and conciliatory, brings us closer to one another and closer still to the innermost truth of our own being.

Orphaned as a teenager after growing up in a violent and abusive home, Ostaseski devoted his life to service and the work of healing. In his early thirties, he did volunteer work aiding Central American refugees. In the 1980s, he labored on the front lines as AIDS devastated San Francisco with incalculable losses of lives, many having only just begun. In 1987, he co-founded the city’s wonderful volunteer-run Zen Hospice Project. Decades into the endeavor, a heart attack followed by open-heart surgery thrust Ostaseski into a confrontation with his own mortality. Such palpable awareness of death, he observes, vitalizes and clarifies life with tremendous power. But his most impassioned insistence is that we need not wait until we ourselves hover on the precipice of death in order to apply its clarifying force to how we live our lives.

Reflecting on the profound transformations he has witnessed in his work with thousands of dying people and their living loved ones, Ostaseski writes:

Dying is inevitable and intimate. I have seen ordinary people at the end of their lives develop profound insights and engage in a powerful process of transformation that helped them to emerge as someone larger, more expansive, and much more real than the small, separate selves they had previously taken themselves to be. This is not a fairy-tale happy ending that contradicts the suffering that came before, but rather a transcendence of tragedy…. I have witnessed a heart-opening occurring in not only people near death, but also their caregivers. They found a depth of love within themselves that they didn’t know they had access to. They discovered a profound trust in the universe and the reliable goodness of humanity that never abandoned them, regardless of the suffering they encountered. If that possibility exists at the time of dying, it exists here and now.

Drawing on the ancient wisdom of Buddhism, Ostaseski considers the inseparability of life and death:

In Japanese Zen, the term shoji translates as “birth-death.” There is no separation between life and death other than a small hyphen, a thin line that connects the two.

We cannot be truly alive without maintaining an awareness of death.

Death is not waiting for us at the end of a long road. Death is always with us, in the marrow of every passing moment. She is the secret teacher hiding in plain sight. She helps us to discover what matters most.

That discovery, Ostaseski argues, is an active process — one which not only can but ought to be mastered well before we find ourselves before the eternal eclipse of existence. Four decades after physicist David Bohm contemplated how our habits of mind shape our reality, Ostaseski writes:

The habits of our lives have a powerful momentum that propels us toward the moment of our death. The obvious question arises: What habits do we want to create? Our thoughts are not harmless. Thoughts manifest as actions, which in turn develop into habits, and our habits ultimately harden into character. Our unconscious relationship to thoughts can shape our perceptions, trigger reactions, and predetermine our relationship to the events of our lives.

The single most powerful interior orientation that shapes our experience of events, he reminds us, is that of love — love in the largest possible sense, one which calls to mind the poet Elizabeth Alexander’s beautiful verse: “Love beyond marital, filial, national, / love that casts a widening pool of light.” Looking back on his own awakening to the healing power of love, Ostaseski writes:

In the horror of my own suffering, I always had held out the hope that one day someone would rescue me. I had imagined that I would be saved by love coming toward me. Just the opposite. I was rescued when love came through me.

Death, he observes, can be an immensely powerful conduit for such an embodiment of love — something Alan Turing knew when he penned his stirring letters on love and loss. Ostaseski writes:

The boundlessness of love is made evident when the veils between this world and the invisible world are thinnest. At birth and death, love melts any division…. In such moments, we glimpse a love without limitation, a love unlike the commerce-like reciprocal exchange that characterizes many romantic relationships (as when someone else expresses love for us and we feel obliged to react in turn). This is an entirely different order of love, one that springs from the very source of our being. It recognizes and responds to the intrinsic goodness of the human heart. It is both profoundly receptive and dynamically expressive.

This facet of love… exists both before and beyond conditions. It is not something to be achieved by our personalities. It is not an idealistic love to be attained by following a certain path, nor is it the result of reaching a special spiritual state. It is always present. In a way, it is the background for all experience, the very essence of our being.

This love is the source that allows us to welcome everything and push away nothing. The sort of fearless openness required to turn toward our suffering is only possible within the spacious receptivity of love.

Drawing on his work with the dying and on the healing of his own life, Ostaseski outlines the five central “invitations” — habits of mind, orientations of spirit — through which an untruculent acceptance of death can become a love-expanding, life-expanding force:

2. Welcome everything, push away nothing.

3. Bring your whole self to the experience.

4. Find a place of rest in the middle of things.

In the remainder of The Five Invitations, Ostaseski delves deeper into each of these precepts to distill its vital lifeblood into insights and practices with which to enrich and ennoble our diurnal existence. Complement it with Oliver Sacks on death and the redemptive radiance of a life fully lived, psychoanalyst Adam Phillips on how Darwin and Freud shaped our relationship with death, these seven unusual children’s books about mortality, and Seneca on the key to resilience in the face of loss.