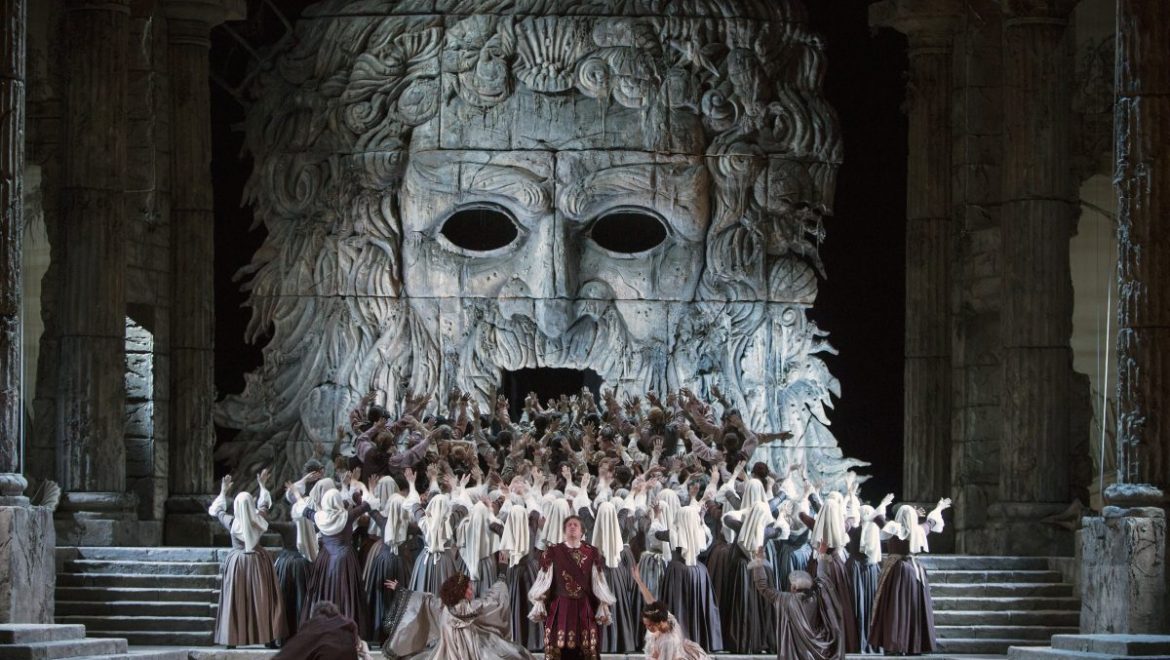 Mozart’s first operatic masterpiece returns to the Met in the classic Jean-Pierre Ponnelle production, conducted by Music Director James Levine. The superb ensemble includes Matthew Polenzani as the king torn by a rashvow; mezzo-soprano Alice Coote in the trouser role of his noble son Idamante; soprano Nadine Sierra as Ilia; and soprano Elza van den Heever as the volatile Elettra, who loves Idamante to the bounds of madness.

The opera is set in Crete, about 1200 BC. Helen, the wife of King Menelaus of Greece, has been carried off by Paris, son of King Priam of Troy, triggering the Trojan War. As she is also the sister-in-law of Agamemnon, several Greek kings allied with him have joined forces to lay siege to the city of Troy. One of these kings is Idomeneo (Idomeneus) of Crete. Having been away for many years, Idomeneo has, prior to his victorious return, sent ahead of him some Trojan captives, including Priam’s daughter, the princess Ilia. On her arrival in Crete she is rescued from a storm by Idomeneo’s young son, Idamante, who has ruled as regent in his father’s absence. The two have fallen in love. Princess Elettra, daughter of Agamemnon and Clytemnestra, also loves Idamante. After Elettra and her brother, Oreste, killed their mother and her lover, she was forced to flee their home in Argos and has taken refuge in Crete.

Ilia is torn between her growing love for Idamante and her hatred for his father, who is an enemy of her country. Idamante, whose father’s return is expected soon, proclaims his love for her and begs her not to condemn him for the actions of his father. But Ilia, still a prisoner, cannot yet bring herself to declare her love for him. Idamante announces that as a gesture of goodwill the Trojan prisoners will be released. The king’s advisor, Arbace, brings the news that the returning fleet was shipwrecked in a storm and that Idomeneo has drowned. Princess Elettra is disturbed that the prisoners have been freed; worse still, her jealousy over Idamante’s love for Ilia is growing stronger.

On the coast, sailors make their way ashore in the storm, begging the gods to show mercy. As the sea calms, Idomeneo appears. He has not drowned, as had been reported, but has been saved by Neptune, god of the sea, after vowing to sacrifice to him the first man that he comes across. That man turns out to be his own son, Idamante, who has come to the shore seeking solitude after hearing of his father’s death. Idomeneo is horrified that he must kill his son, and at first he does not reveal his identity. He finally does so, but Idamante—knowing nothing of the promise to Neptune—does not understand why his father pushes him away so harshly. The Cretans, meanwhile, praise Neptune for the return of their king.

Idomeneo seeks counsel from Arbace as to how he might save Idamante from sacrifice. They agree to banish him from the island: he should escort Elettra back to Argos, where she can regain the throne. They will find another way to appease Neptune. Arbace assures the king of his loyalty. Ilia tells Idomeneo how happy she is that he has been saved. She also praises his son, and tells Idomeneo that she now considers Crete a kind of homeland. Idomeneo begins to suspect that she is in love with Idamante, and it dawns on him that all three of them will be victims of the gods. Only Elettra, who has heard that Idamante is to escort her back to Argos, is happy: she sees that she might win his heart once she has gotten him away from her rival.

By the harbor, Elettra and the people of Crete praise the calm seas as she prepares to leave. Idomeneo dismisses his son. Idamante (who still knows nothing of his father’s promise to Neptune) is heartbroken at such treatment, but he prepares to leave with Elettra. Before they can set sail, though, another storm arises and a sea monster appears. Idomeneo confesses that it was he who has caused the god’s displeasure by breaking his vow, but he will not sacrifice an innocent victim. The people run from the monster.

Ilia hopes that the wind will carry her message of love to Idamante. When he arrives to say that he is going to fight the sea monster, she finally admits her love directly. Idomeneo and Elettra find them together, and Idomeneo (still unable to reveal his reasons) commands again that his son leave Crete. Idamante resolves to do so, and they each express their individual sorrows. Arbace reports that the people are demanding that the king deliver them from the monster and laments that Crete has become full of sadness.

The High Priest of Neptune describes the destruction and death caused by the monster and demands that Idomeneo name the victim who must be sacrificed to appease Neptune. The king announces that the victim is his son, Idamante. The people are wracked with grief. The king and the priests prepare for the forthcoming sacrifice but are interrupted by news that Idamante has killed the monster. Idamante at last understands why his father has been cold to him: out of love, not hatred. He demands that the sacrifice proceed, as this is the price for peace in Crete. Ilia volunteers to take his place. But as Idomeneo is about to sacrifice his son, the voice of Neptune is heard proclaiming that if Idomeneo will step aside and yield the throne to Idamante and Ilia, the gods will be satisfied. Everyone rejoices except Elettra, who is horrified at the prospect of her beloved in the arms of her rival.

Idomeneo agrees to give up the throne to appease Neptune and pronounces his blessing on the union of his son with the Trojan princess. The people celebrate the happy couple.