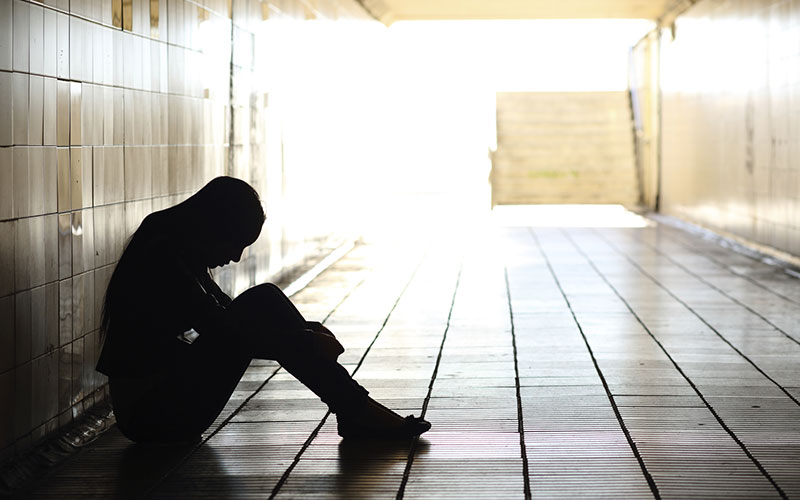 Pioneering Psychotherapist Frieda Fromm-Reichmann, the Loneliness of Mental Illness, and the Healing Power of Believing in a Person’s Inextinguishable Inner Light

How a visionary woman persisted in leading a quiet revolution in mental health.

“All good teachers know that inside a remote or angry person is a soul, way deep down, capable of a full human life,” Anne Lamott wrote in her beautiful meditation on the life-giving power of great teachers. Those whom teachers — nor parents, nor friends, nor spouses, nor lovers — cannot reach, those whose inner turbulence has metastasized into acute mental illness and shipwrecked them on the remotest edges of the mind, are left to psychotherapists. But the most effective therapists are animated by the same unflinching conviction that within each patient lives an almost sacred person, and that no person, no matter how damaged and disturbed, is irredeemable or incapable of having a full life.

This was the animating ethos of pioneering psychotherapist Frieda Fromm-Reichmann (October 23, 1889–April 28, 1957), who had narrowly escaped from Nazi Germany, lived in exile in France and Palestine, and ended up in America to begin nothing short of a revolution in mental health care. (Adding another layer of rebellious complexity to her life was her decision to marry, while still in Germany, the great humanistic philosopher and psychologist Erich Fromm — her colleague and onetime patient, ten years her junior.) In many ways, she was the Oliver Sacks of mental health, not merely applying her robust professional expertise to the healing of her patients but bathing them in largehearted perseverance of faith in the inextinguishable light of their humanity.

Fromm-Reichmann was introduced into the popular imagination by the improbable 1964 hit novel I Never Promised You a Rose Garden — the faintly fictionalized autobiographical account of Joanne Greenberg, one of her patients, who had made a seemingly miraculous recovery from what is considered the most hopeless of mental illnesses: schizophrenia. Greenberg had entered Fromm-Reichmann’s care as teenager so afflicted as to be gashing her arms with jagged tin can tops and putting out cigarettes into the wounds. She exited four years later as a fully functioning college student who went on to have a family and become a successful writer.

Although Greenberg wrote the novel under the pseudonym Hannah Green and christened Fromm-Freichmann “Dr. Fried,” details about the institution and their respective lives soon revealed their real identities. Against the odds of what seemed like an unusual and ill-advised premise for a popular novel, I Never Promised You a Rose Garden became a sensation, amassing a cult following through the six million copies sold in decades since. But its most enduring feat was to make its millions of readers fall in love with Frieda Fromm-Reichmann and her maverick insistence that even the most tortured minds have a shot at serenity given enough attentive patience and persistence on behalf of those qualified to help them.

It was the novel that first introduced fifteen-year-old Gail Hornstein to Fromm-Reichmann’s work and planted the long-germinated seed of what would become, thirty-four years later, To Redeem One Person Is to Redeem the World: A Life of Frieda Fromm-Reichmann (public library) — a spectacular biography ten years in the making, which Hornstein, by then a psychologist herself, hadn’t set out to write but found herself unable not to.

Hornstein considers the seedbed of Fromm-Reichmann’s unusually tenacious and patient faith in the potential for healing:

Frieda’s capacity to wait had been honed as a child, when she trained herself to expand to infinity the time she gave her parents to tire of misunderstanding. Medical school in Königsberg was one long act of patience, designed to prove that she and the handful of other women deserved to be there. Later, working at a Prussian army hospital during World War I, she learned from brain-injured soldiers what it was like to have a shell explode in your face and still be alive. Their muteness became her measure. When she took up treating schizophrenics in the 1920s, they seemed so intact by comparison that she found the work a pleasure. Most psychiatrists, accustomed to treating the “worried well,” find the unbearably slow pace of therapy with psychotics intolerable. But Frieda could wait cheerfully through years of infinitesimal gain; the knowledge that recovery was anatomically possible was enough to keep her going. She could tolerate any behavior, no matter how disgusting or bizarre, so long as it seemed necessary to protect a vulnerable person. It was only when symptoms became ruses or habits that she started badgering patients to give them up and get better.

Fromm-Reichmann held nothing back in helping her patients — nothing of herself, and nothing of the often arbitrary rules by which her profession operated. Hornstein writes:

She was willing to try practically anything that might help them, which was a great deal more than most other psychiatrists were willing to do. She saw one patient at ten o’clock at night because that’s when he was most likely to talk. She took others on walks around hospital grounds, or to symphony concerts, or to country inns for lunch. Those too distraught to leave at the end of an hour were permitted to stay for two. If a patient was violent and couldn’t be let off the ward, she went to his room or saw him in restraints, if necessary. “She would have swung from the chandelier like Tarzan if she thought it would help,” Joanne Greenberg later observed. A colleague remarked, not admiringly, that Frieda’s patients got better because she simply gave them no other choice.

“Hope is a gift you don’t have to surrender, a power you don’t have to throw away,” Rebecca Solnit exhorted the common reader in her abiding manifesto for tenacious hope in the face of the seemingly impossible, and it was precisely this refusal to squander hope that Fromm-Reichmann embodied in her specialized field. Hornstein captures its essence:

For Frieda, treatment of mental illness was like physical therapy after stroke: a painstaking exercise in hope. Improvement was unpredictable, and was often followed by relapse or deterioration. Recovery, to the extent it was present, proceeded at an agonizingly slow pace. It was natural for the doctor to have periods of discouragement, even real despair, but he couldn’t afford to give up, no matter how many setbacks there were. A patient had to have at least one person who could imagine the possibility of his getting well.

But this was, and to some extent still is, a radical attitude in Fromm-Reichmann’s day, especially when it came to the patients too underprivileged to afford private psychotherapy or simply too ill to be helped by it, those who ended up in mental institutions — institutions that only a few decades before Fromm-Reichmann’s arrival in America perpetrated infernal abuse of the mentally ill. What enabled her to hold this view so ardently was the conviction, furnished by her intensive work with patients, that sanity and insanity aren’t binary categories between which one flips a switch but a spectrum along which one slides according to an as-yet enigmatic combination of genetics and environmental triggers. Alongside it — and this was another of Fromm-Reichmann’s pioneering insights — was a parallel slide into loneliness, perhaps the crowning anguish of mental illness. Hornstein writes:

The loneliness of mental illness, Frieda emphasized, is nothing like the solitude people seek at the ocean or to do creative work. It is a state of extraordinary anguish in which a person ceases to be able to imagine, much less experience, anyone else being able to enter his experience. Understanding this profound kind of loneliness was Frieda’s life goal. Rarely speaking directly about politics or history, analyzing loneliness was her way of coming to grips with the horrors she had witnessed: the men gassed in trenches who screamed in their sleep, the schizophrenics who set fire to their bodies, the refugees who stumbled across a ruined Europe, terror in their eyes.

Loneliness, in fact, was Fromm-Reichmann’s most acute point of compassion and curiosity. She spent many years writing and rewriting a trailblazing paper on loneliness that went on to shape the study of this commonest malady of spirit for decades to come. In The Lonely City, one of the finest books of 2016, Olivia Laing extols it as “one of the first attempts by a psychiatrist or psychoanalyst to approach loneliness as an experience in its own right, distinct from and perhaps fundamentally more damaging than depression, anxiety or loss.” She cites Fromm-Friedmann’s own writings:

People who are in the grip of severe degrees of loneliness cannot talk about it; and people who have at some time in the past had such an experience can seldom do so either, for it is so frightening and uncanny in character that they try to dissociate the memory of what it was like, and even the fear of it.

Loneliness, in its quintessential form, is of a nature that is incommunicable by the one who suffers it. Nor, unlike other non-communicable emotional experiences, can it be shared via empathy. It may well be that the second person’s empathic abilities are obstructed by the anxiety-arousing quality of the mere emanations of the first person’s loneliness.

Fromm-Reichmann knew that loneliness was neither symptom nor cause, not exactly, but more of a serpent with its tail in its mouth — the inescapable attendant malady of those suffering from mental illness, compounding their suffering often past the threshold of the bearable. Hornstein writes:

Frieda urged psychiatrists to talk openly of their patients’ loneliness and to create a space where both of them could explore such feelings. For patients too withdrawn to speak, “the doctor’s mere presence” or statements like “I know” and “I am here” might begin to ease the isolation. The main obstacle to “therapy with the lonely,” she argued, was the psychiatrist’s inability to confront this terror in his own life. As a reviewer of her paper noted, “The fear of loneliness, the fear of being enveloped by that nameless state, may be what really makes people afraid of schizophrenic patients, makes them think of these patients as ‘out of this world’ or as a different species than the rest of us.”

Not being able to understand somebody communicating with us connotes loneliness. If we don’t understand, that touches our own possibilities of loneliness, and rather than accepting [that] there is this barrier of loneliness between the psychotic and us, we evade it and feel guilty. I think that the guilt feeling is an evasion of accepting the tragic facts of human loneliness.

How Fromm-Reichmann devoted her life to alleviating that tragedy by tearing down the barrier of loneliness is what Hornstein goes on to explore in the revelatory and emboldening To Redeem One Person Is to Redeem the World. Complement it with Walt Whitman on healthcare and the human spirit and the story of how trailblazing Victorian journalist Nellie Bly risked her life for an 1887 exposé that ended asylum abuse, then revisit the fascinating science of how the microbiome might impact mental illness and Virginia Woolf, who spent her whole life combatting mental illness, on the relationship between loneliness and creativity.