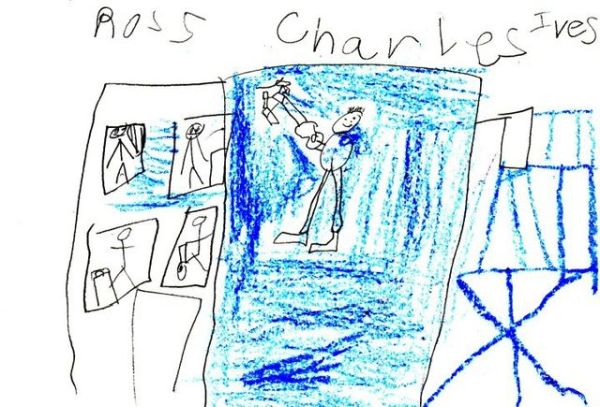 “I played some pieces of 20th/21st century music for kids,” Reddit user JohannYellowdog professed to an Imgur thread on Monday. “I asked them to pick their favorite piece and draw a picture.”

If you’ve ever felt a panic listening to contemporary classical music, realizing you have absolutely no idea what is happening, you can surely sympathize with a group of 7-year-olds that was subjected to the music of Joby Talbot, John Adams or Shostakovich and forced to express their responses immediately after.

But, of course, many 7-year-olds have not yet acquired debilitating feelings of self-doubt, anxiety and embarrassment that hinder so many a grown adult in their daily lives. And so, when asked to draw in response to some of the most powerful and emotive songs made in the past two centuries, they did so quite beautifully.

The following drawings prove that no matter how much you learn as a grown-up, it’s hard to compete with the fearless imagination of a little kid. If you want to believe in the universal power of music, the ubiquitous language of art, and the damn fearless chutzpah of people under 10 years old, scroll down for the cutest thing you’ll see online today.

Ross chose “The Fourth Of July” from “Holidays” symphony by Charles Ives. One person plays a guitar, while others play instruments in different rooms, illustrating the chaotic sound of lots of things happening at once.

Ollie wrote about “Cumulonimbus” by Joby Talbot. The composer intended to depict the passage of overhead clouds, so it’s interesting to see how Ollie picked up on details like “swimming slow motion,” “a boat drifting down a river” and “walking on clouds.”

This picture was drawn in response to the third movement of John Adams’s quasi-sonata for violin and piano, “Road Movies.” It depicts a man dancing (the loops around his waist are his legs moving so fast that they become a blur). I was specifically told that it was “Irish dancing,” which was interesting because the movement has always sounded to me like Bluegrass (which would have been influenced by Irish music).

Daniel drew a picture depicting what he pictured happening during the first movement of Shostakovich’s 9th Symphony. He picks up on the celebratory atmosphere, but also notices that it’s more the kind of celebration one would have for a birthday party or other trivial affair, and not the epic victorious music that Stalin would have wanted.

Far and away the firm favorite, however, was Penderecki’s “Threnody to the Victims of Hiroshima.” Mark draws a girl being pursued by an evil clown. The particles surrounding them are raindrops from the storm clouds above.

In Matthew’s picture, two girls are cornered and attacked by three figures including a man with a gun on the left (the bullet paths are meticulously included), a vampire bat (above right), and a tiger or other large cat (center right).

“EQ” draws a chase through a large house (the jagged line on the left is a staircase). One figure, near the top, carries a candle to see through the dark. The lower figure carries a knife.

Robert had a unique, though perfectly valid, interpretation for the screeching strings at the start of “Threnody.”

More Penderecki, this time showing somebody about to be stabbed while they lie asleep. Mortal danger inside a house was a recurring motif in many of the Penderecki drawings. The killer appears to be part vampire (fangs) and part ghost (no feet, drifting above the floor). The killer chuckles “Mo ha ha.”

Finally, Patrick draws the “Threnody” as another murder (this time, a stabbing), although unlike many of the others, this one takes place in broad daylight. Robert’s does not engage in sadistic laughter or taunt his victim. Instead, his killer is neutral, carefully expressionless.