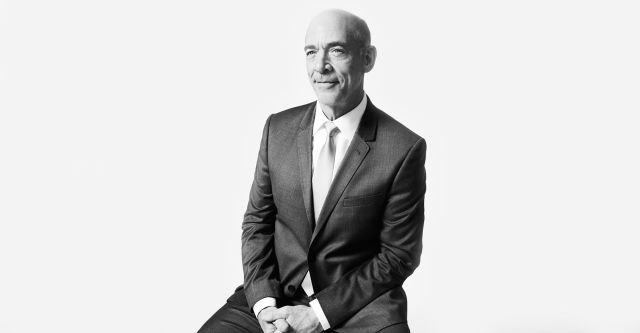 Mr. Simmons, do you think your appearance influences the kind of roles you’re given?

Sure, sometimes the casting decision is as simple as, “I am who I am, I look like this, I have a low voice, and I look like somebody’s dad or somebody’s boss or the police chief.” Those are just the roles that often have happened to come my way.

Does that bother you?

Well, within that universe there are enough differences in those characters and in the style of those pieces to keep it interesting, you know? Half the fun of doing what I do for a living is that I get to do different things. There are certain similarities in a lot of characters I’ve played but I’ve gotten to play nice guys and bad guys, dumb guys and smart guys… They tend to be bald guys. (Laughs) But I even get to wear hair sometimes too! It’s always a treat to get to play another evil bastard.

Being evil is easy! Just to be able to play someone that is relentless and unforgiving and mean… It’s really fun. (Laughs)

What about the nice guy?

I would like a part to come to me that is like the part that Dennis Franz was so brilliant in, and fortunate to be able to do in NYPD Blue. A sort of similar looking actor to me, you know, a generic bald white guy who you would often think of as playing the authority figure — but he was the disgruntled middle man. It is interesting to be playing a lot of authority figures simply because I had a tempestuous relationship with authority throughout my life. When I was in high school, I went from being one of the jocks to being one of the revolutionary hippie types and found myself at odds with and very disdainful of authority.

“I just happened to work with a lot of age-appropriate directors as a very young, very bad actor.”

Did that change when you went off to college?

Well, I had a great regard for teachers and people who are truly dedicated to that, even then, because my dad, who was a musician and a music teacher, was running the department where I went to college.

What were you studying?

I first thought that I would get a degree in music education because it just seemed smart — smarter than what I ended up getting. But I never studied acting; I kind of just segued into doing musical theater, opera and stage performance, so my acting teachers have been directors. I think I just happened to work with a lot of age-appropriate directors as a very young, very bad actor. (Laughs) These guys were my mentors; they helped me and taught me on the job. These days I’m fortunate to be in a position now where I can more or less pick and choose — I mean, I don’t get every part I like but I do get to be selective about who I work with. It’s been a long time since I’ve been on a job with a director that I didn’t like and respect. The times that does happen, you just be a good soldier, do a good job, collect your pay check and try to make the day as short as you can.

Is that why you often work with the same directors?

Oh absolutely, yeah. But it’s a two way street. I’ve been blessed, very fortunate, to find Sam Raimi, Jason Reitman, the Coen Brothers… Alan Taylor is a wonderful director that I got to work with on Oz a couple of times. Hopefully I can add Damian Chazelle to the list now and be part of his repertory company. But to find a comfort level, a level of mutual respect, and a level of communication with really, really, really great directors has been a real blessing in my career.

So you’ll still audition for the right director?

You know what, the first time I auditioned for the Coen brothers was for O Brother, Where Art Thou? — which I wasn’t in. (Laughs) But these guys are so thorough and have such a strong idea of exactly what they want, such a specific vision of the character… Every time I’ve worked for them, I’ve auditioned. Multiple times.

The last time I met them for Burn After Reading, all my other auditions had been on tape because I was in LA and they were in New York, so this was the only time we actually met in the same room. And I went to the casting director’s office and I read the two scenes, Joel and Ethan are sitting on the couch and they look at each other and go, “Well God damn it JK, that’s exactly right.” (Laughs) They were pissed off because they had envisioned this guy physically very different from me, but they were like, “Okay, alright, we want you to do it.”

That’s quite the compliment coming from the Coen Brothers.

I just do what I do. There is a similarity in my approach to doing the work: the thing that I try to do consistently is just bring it off the page, own it and try to make it real. There are things that you read as an actor that just jump off the page, and I look for good writing that it’s easy to do that with! Good writing is easy to act, bad writing is much more difficult to act. Like, it was shockingly simple to learn all the swear lines for my role as Terrence Fletcher in Whiplash.

Because swearing comes naturally to you?

(Laughs) It was challenging just getting through the days, even just vocally it was a physical challenge. I had to just shred my vocal chords, and scream the way I screamed. But in terms of learning the lines… Damian Chazelle, who directed the film, was very collaborative and open with me in hearing what I wanted to do in terms of improvising things or making little changes that just seemed that seemed more organic to me. You know, the majority of the rants and the expletives and the spewing that I do in the film is stuff that Damian wrote. But there were definitely times when I went off the map and added my own horrific images. Good crazy writing makes me crazy on set… Bad writing makes me crazy in a different way.