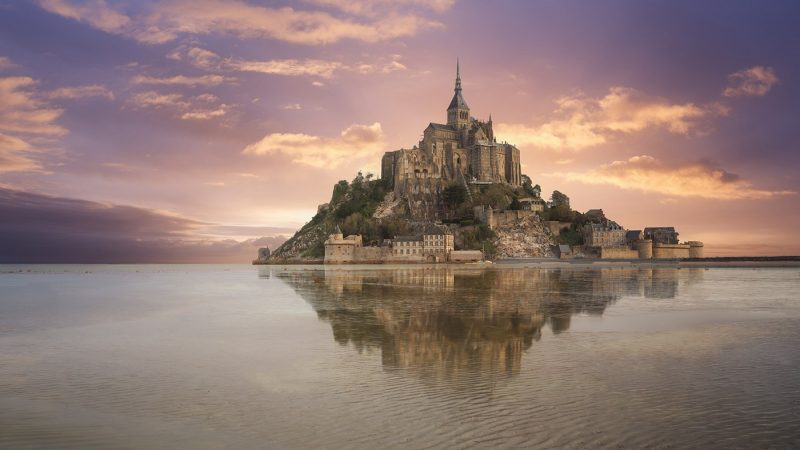 by CAITLIN MORTON and PRETTYPRUDENT

The magical worlds inhabited by Disney characters—Agrabah, anyone?—have inspired children for generations, but did you know that the creative teams behind these visions were often themselves inspired by authentic villages, castles, and vistas? We took a journey through the Disney film archives, matching up enchanting fairy tales and legends with their real-world locations. This gallery was originally published in 2015. It has been updated.

Disney’s 56th animated feature film tells the story of Moana, a teenage girl who goes on an adventure to save her Polynesian island and people. The film takes place about 2,000 years ago on the fictional island of Motunui, but the filmmakers went to great lengths to make sure the narrative details and visual aspects of the movie were as true to the South Pacific as possible. Directors John Musker and Ron Clements traveled to several islands to conduct research, primarily Fiji, Tonga, and Samoa, with the latter becoming the main inspiration for Motunui. It’s hard work, but someone’s got to do it. —Caitlin Morton

While the plot of Hercules strays extensively from actual Greek mythology (Zeus’s extramarital affairs aren’t exactly G-rated, after all), many of the locations in the film pay homage to real Mediterranean islands and classical architecture. For example, Phil’s Island is based on the island of Rhodes, as implied by the Colossus of Rhodes ruins seen in some shots. And architecture buffs will notice the various nods to classical Greek structures, like the Ancient Theatre of Epidaurus, the Acropolis, and the Temple of Zeus (pictured). —C.M.

Prince Eric’s beautiful castle in The Little Mermaid was inspired by the equally beautiful Château de Chillon on Switzerland’s Lake Geneva. (Sorry, Ariel. Fresh-water mermaids only.) The chateau has been in use since the Bronze Age as a fortress, arsenal, prison, and residence for counts. Lord Byron romanticized the chateau in his 1816 poem «The Prisoner of Chillon,» and it remains a popular historic destination to date. —C.M.

The Imperial City in Mulan serves as home to the Emperor of China and is the site of the heroine’s climactic (spoiler alert!) defeat of the Huns’ leader. The city palace and gates were modeled after the Forbidden City in Beijing. Chinese emperors lived in the UNESCO-protected complex from 1420 to 1912; it is now a museum for ancient art and artifacts. —C.M.

Finding Nemo takes us on an underwater tour of the Great Barrier Reef and the East Australian Current before emerging right in front of Sydney’s scenic skyline. While the submerged scenes are more believable than realistic (artists went scuba diving in Hawaii, not Australia, for inspiration), the detailed depiction of Sydney Harbour is an impressive replica. One fictitious addition? 42 Wallaby Way, an address we couldn’t forget even if we wanted to. —C.M.

Forget double-decker buses: The best way to see London is from the sky (with a dash of pixie dust). Just look at the most magical scene in Peter Pan, when Peter takes the trio of Darling children on their first flight, stopping for a quick break on the minute hand of Big Ben. The animators’ attention to architectural detail is impeccable—you can almost believe you were a part of the after-hours tour of England’s capital. —C.M.

French artist Laurent Ben-Mimoun looked to the romantic oil paintings of 18th-century artist Fragonard to create the concept art for Tangled. He started with the vision of a Renaissance castle from which Rapunzel could let down her hair, recalling Mont Saint-Michel in Normandy. As production progressed, he added medieval and French Renaissance influences—like small round towers inspired by Château de Chenonceau—as well as hints of modern architecture, like the triangular composition of the Century City Twin Towers in Los Angeles. —Pretty Prudent

The mystical Inca ruins, perched 8,000 feet above sea level in Peru, served as the no-so-subtle inspiration for Pacha’s village in The Emperor’s New Groove, where Emperor Kuzco has grand plans to build a Kuzcotopia theme park. Ironically, Machu Picchuhas become a major Peruvian tourist attraction since the Inca abandoned the site in the 16th century. Adventure travelers hike (or bus) to see the Temple of the Sun, the Room of the Three Windows, and Inti Watana, the ritual stone that is thought to have served as an astronomical clock for the Inca. —P.P.

Snow White and the Seven Dwarfs: Alcázar of Segovia, Spain

With its grand turrets and white facade, you’d never guess that Snow White‘s castle was home to Disney’s original Evil Queen. The palace was modeled after the Alcázar of Segovia, a castle perched on a crag in central Spain. It has served many purposes since the 12th century: as a military fort, home to Spanish royalty, prison, artillery college, and, most recently, museum. No word as to how many chatty mirrors are hidden inside. —C.M.

Disney’s design team visited the glens and Highlands of Scotland for its recent feature Brave, about rebellious red-headed princess Merida who wants to brake the shackles of tradition. They took inspiration from Urquhart Castle on the banks of Loch Ness and Dun Carloway broch on the Isle of Lewis, but the bulk of the design—the sprawling, rich interiors of Merida’s DunBroch Castle—were drawn from the 13th-century Eilean Donan Castle on Scotland’s west coast. Clan MacRae’s grand table at the center of the Banqueting Hall is the model for Merida’s royal family gatherings; the towers, stairwells, and turrets of the castle inform all the nooks and crannies the princess haunts throughout the movie. —P.P.

Updirector Pete Docter traveled with a team of Pixar creatives to Venezuela’s tepuis (table-top mountains) to gather inspiration for the lost world of Paradise Falls. Their trip culminated with a trip to Angel Falls, the world’s tallest waterfall, which the team recorded with thousands of photographs, videos, and sketches before taking that inspiration home to create the bucket-list destination for the film’s elderly hero Carl Frederikson (voiced by Ed Asner). «My feeling is that the location is also a character in the movie,» Docter told USA Today. —P.P.

This 19th-century Church of England served as the model for the chapel featured in Frozen during the coronation scene, in which Elsa is crowned Queen of Arendelle. Can you guess what else St. Olaf’s church inspired? That’s right—the name of everybody’s new favorite snowman. —P.P.

Yes, the cathedral in The Hunchback of Notre Dame is the very same Cathédrale Notre Dame that stands in the heart of Paris. The church represents one of the world’s finest examples of French Gothic architecture, with flying buttresses, stained glass, and gargoyles (which Disney animators put to good use). Although it’s one of the darker Disney films thematically, Hunchback does a fine job showcasing the beauty of the building and surrounding city. —C.M.

While Agrabah—a city of «mystery and enchantment»—is meant to be located near the Jordan River, the Sultan’s palace at the center of the Aladdin bears more than a passing resemblance to the Taj Mahal in Agra, India. The Taj Mahal itself is not actually a palace, but rather a tomb for a sultan’s wife—which makes sense, since the Sultan of Agrabah in the film is himself a widower, while Jasmine, the film’s heroine, views the palace as a sort of prison. —P.P.

One of Germany’s most famous landmarks also served as the inspiration for Sleeping Beauty’s castle, both in the 1959 film and at Disneyland itself. Before construction began in Anaheim, Walt Disney visited Neuschwanstein Castle, a 19th-century Romanesque Revival structure, on a European tour. He was inspired by the bright colors and majestic setting of to create the fairytale castle at the heart of Disneyland. —P.P.

The streets and buildings of New York City appear in several Disney films (The Rescuers and Bolt are notable examples), but the city’s most prominent role is in 1988’s Oliver & Company. The film opens and closes with aerial shots of Lower Manhattan(complete with the Twin Towers), and the scenes in between take viewers around Times Square, Central Park, Brooklyn Bridge, and the swanky homes on Fifth Avenue. Although the wide city shots have a dreamy, almost watercolor-like appearance, the prominent sights of NYC are easy to spot. —C.M.

In the 2006 film Cars, the fictional town of Radiator Springs is meant to be a neglected stop along Route 66. One clear connection to that famed stretch of highway is Ramone’s House of Body Art—based on the U-Drop Inn, a rest stop located in Shamrock, Texas. Its Art Deco design by J.C. Berry is easy to spot in Pixar’s re-creation; Ramone’s has a similarly shaped building and large spire (these can also be seen in Cars Land at Disneyland). —P.P.