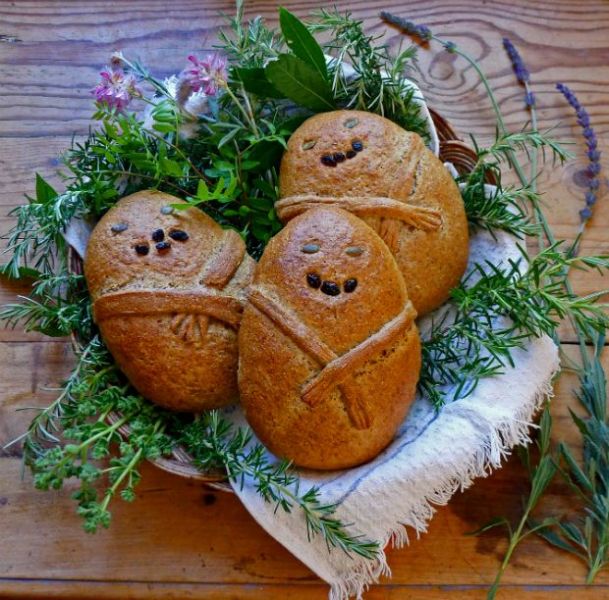 In all the recording I have done to date I have not come across another instance of human-shaped loaves for Christmas or any other of the Twelve Days – contrary to the Feast of Lazarus, when nearly everywhere the Lazarakia are made – while at Easter in many places breads in animal shapes are made, often resembling human figures. Vlakhopoules are a warm memory from my childhood. Although our baking was not done at home – bread was bought from the baker – my mother would not fail to make Vlakhopoules, one for each of her three daughters, on Christmas Eve. In households where there were boys, they made crosses with the same dough. Vlakhopoules were like dolls. They were pretty, slightly sweet-tasting and aromatic, with currants for eyes and mouth. We kept them as something precious and held off as long as possible before pinching pieces out of them. What a warm aroma that was!

Of course in those days they were made with a starter of prozymi – in the ‘50s bakers too were still using it. My dear friend Vagglelitsa Kourti, although she is much younger, still makes these lovely things with special care.

This is her recipe for two Vlakhopoules and two Stavróses:

2 kg flour (preferably half hard and half soft)
a cup of starter with prozymi (or 3 tsp. dry yeast)
3 tsp. salt
a wineglass of sugar (or to your taste)
a wineglass of olive oil
1 tsp. cinnamon powder
tsp. powdered cloves
a few currants for decoration
2 tbsp. sugar and
3 tbsp water to brush the top

Preparation: If a prozymi starter is used, begin the mixture the night before. It is however much easier with yeast. Put the flour, salt, sugar and spices in a basin. Add lukewarm water and begin kneading, adding water gradually as needed, to make a smooth and elastic dough that opens up with kneading. Add the olive oil and continue to blend well. The dough should be firm so that the Vlakhopoules do not lose their shape as they rise when baking. Divide the dough into four equal parts, shape into balls and leave them in the basin for ¾ of an hour, covered with a folded towel. Line a baking sheet with greaseproof paper lightly oiled.

Make an oval shape of the ball of dough. Squeeze the upper part between index and thumb to make the head. Do not cut it off or it will come unstuck later. Slightly flatten the rest with your palms, and with a knife make an incision for the arms and legs. Shape the trunk gently so that the slimmer limbs show sepa­rately. Press the back of the knife into the ends of the hands for fingers. Gently shape the dough into the proportions of a body. Make two dents for the eyes with a sharp instrument and press a currant into each. Carve a smiling mouth shape and press in three or four currants close together.

Shape the second ball of dough in exactly the same way. Shape crosses with the other two, dividing them in half and rolling each piece in a thick cordon. Put one over the other crosswise, with a little water at the point where they join, pressing down so they stick together.

Carefully place them all on the baking sheet. Leave enough space between them for them to expand. Cover with a folded towel and allow to rise without doubling in volume. For them not to crack, pierce here and there with a wooden skewer and bake in a preheated oven at 180 C.

When they are nearly baked, dissolve the sugar in water and take the baking sheet out for a moment to brush the shapes with the syrup. Put them back in the oven to finish baking.
Keep an eye on them and if they are getting too brown cover them with greaseproof paper or foil, as breads containing sugar are easily scorched.

When you take them out of the oven, put them on a grill to cool and if possible dish up while warm.
Whilst in all the villages Vlakhopoules are made for the girls and Stavróses for the boys, in Hortata Vlakhes are made for boys too.