Artist builds a working swing on a BART Train 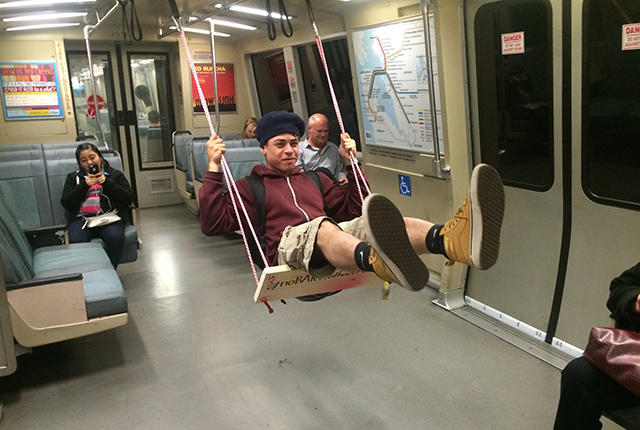 Last month, a few lucky riders on the San Francisco Bay Area’s BART system watched as their normal commute turned into a playground experience. They were invited to take a seat on a swing hung from the middle of the subway car, as Laughing Squid highlights in a recent post.

San Francisco-based artist Hunter Franks recently declared himself BART’s Artist-in-Residence, coming up with various projects to make the system a more joyous communal experience. In order to inject a little whimsy into riding the subway, in late August, he installed a working wooden swing, attaching the ropes to the hanging straps of one of the train cars. He then invited commuters to take a turn.

On his website, he explains that “there can’t be any better place for a swing than a subway train where hordes of adults commute to and from work stuck in a small screeching steel box.” The response was overwhelmingly positive, according to Franks. “People were thrilled and the number of smiles on the train increased 100 percent,” he writes.

Watch it in action below:

11 Amazing Things You Didn't Know Were Invented by Kids