Christmas Around the World: 10 International Destinations to Visit Cities all over the world celebrate Christmas in unique and memorable ways. Here are a few to consider for your last-minute Christmas trip.

Cities all over the world celebrate Christmas in unique and memorable ways. Many showcase their historic, old-world beauty, while others impress with more modern traditions. The following 10 international destinations are just a few of the countless options to consider.

The entirety of Copenhagen seems to transform into a wonderland this time of year. For many, it begins with food, and for others, glogg. You can indulge in both at Hojbro Plads, one of Copenhagen’s prettiest squares on Stroget, the city center’s tangle of pedestrian streets, which hosts a Danish- and German-influenced Christmas market, or at the Nyhavn Christmas Market, near the Royal Danish Playhouse, where vendors set up stalls alongside the quaint Nyhavn canal. Northern Europe’s biggest Christmas market, covering 20 acres, takes place at Tivoli Gardens, near the city’s Central Station. 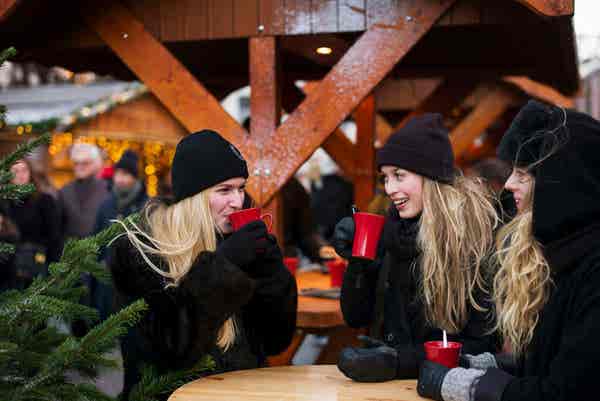 Warming up with glogg at the Christmas market at Hojbro Plads in Copenhagen.CreditJakob Dall for The New York Times

The walled cities of Valletta and Mdina are your entry points to this Mediterranean archipelago, which many conquerors and countries have left their mark on. Visitors will likely be entranced with this cultural mash-up, but come December, Malta’s deep-rooted Catholicism is on full display in the celebration of Christmas. Of special note is the stunning St. John’s Co-Cathedral, a soaring barrel-vaulted space, built in the 1570s. The church hosts candlelit carol singing throughout the month of December. 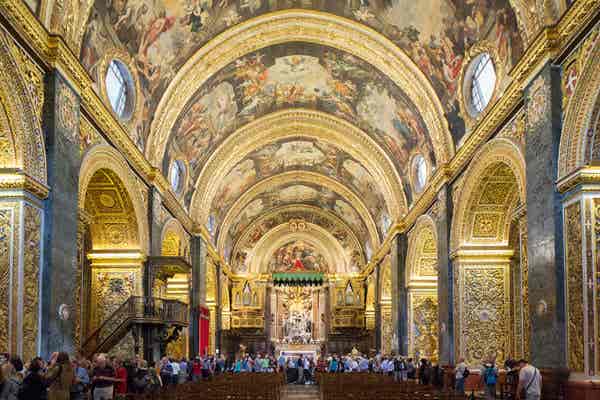 The interior of St. John’s Co-Cathedral in Valletta.CreditGianni Cipriano for The New York Times

Prague has become one of the most visited cities in Europe for good reason: remarkable architecture, rich history and excellent drinking and eating options. During the winter, its churches, castles and other large distinctive buildings provide a dramatic backdrop to the city’s attractive landscape. Its Christmas markets are considered among the best in Europe. This year’s theme is “The History of Prague,” so many gables on the market huts are decorated to represent historical figures like Franz Kafka. 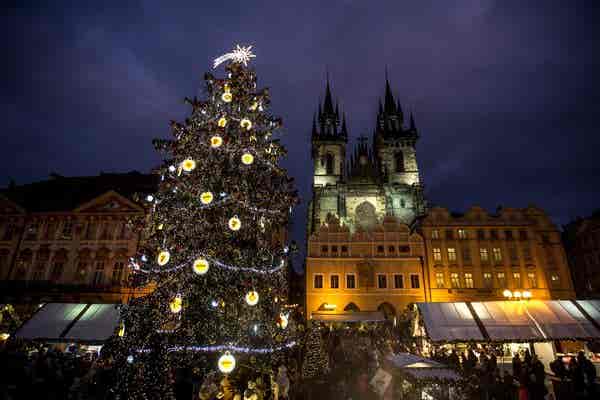 December is an ideal (and potentially affordable) month to explore Dublin’s glorious sense of history, from its centuries-old pubs to its Georgian architecture to the stately Trinity College at its center. Carols at St. Patrick’s Cathedral are an annual Christmas highlight, as is the Moving Crib at St. Martin Apostolate’s, a “nativity tableaux told through handcrafted moving figures” that has been around for more than 60 years. 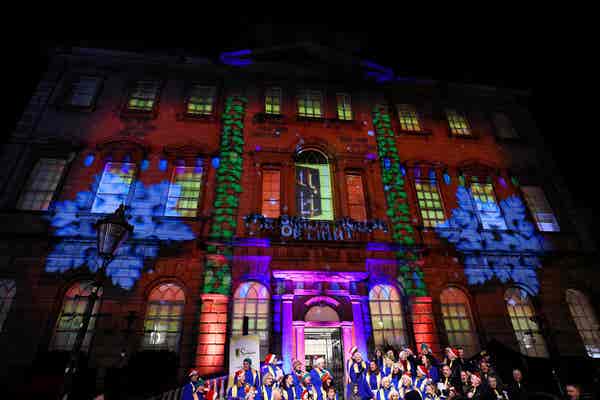 Christmas carols are sung outside a shopping center in Dublin.CreditClodagh Kilcoyne/Reuters

If buying gifts is on your itinerary, Zurich is an impressive shopping smorgasbord, particularly around the holidays, from multiple Christmas markets and the luxury boutiques of Bahnhofstrasse, the city’s main shopping street whose many thousands of Christmas lights are a draw of its own, to the indie designers and vintage shops in the emerging industrial zones. Another annual lighting spectacle, Lichterschwimmen, on Dec. 21, features hundreds of tiny lanterns that are sent floating down the River Limmat. 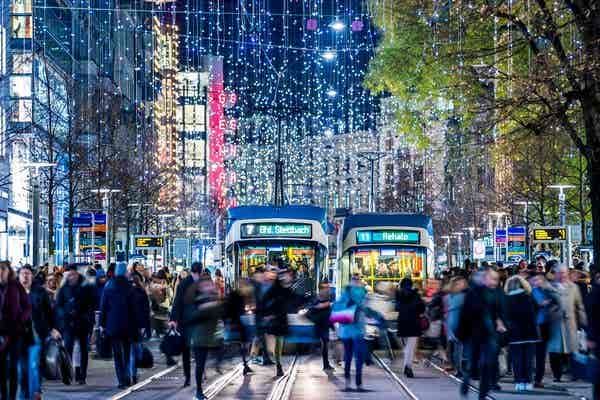 Hong Kong’s skyline at night is visually stunning all year long, but this December the city takes it to a higher level with an update to A Symphony of Lights, which has illuminated Victoria Harbor since 2004. A revamped version of the light show and a new recorded soundtrack performed by the Hong Kong Philharmonic Orchestra began on Dec. 1. As impressive as Hong Kong’s skyline is, the city also remains one of the most passionately creative in Asia, a playground for artists and designers, chefs and entrepreneurs.

Corrections: An earlier version of this article characterized incorrectly A Symphony in Lights, a live show in Hong Kong. It runs year-round, not just over the holidays, and the accompanying soundtrack by the Hong Kong Philharmonic Orchestra is pre-recorded, not performed live. 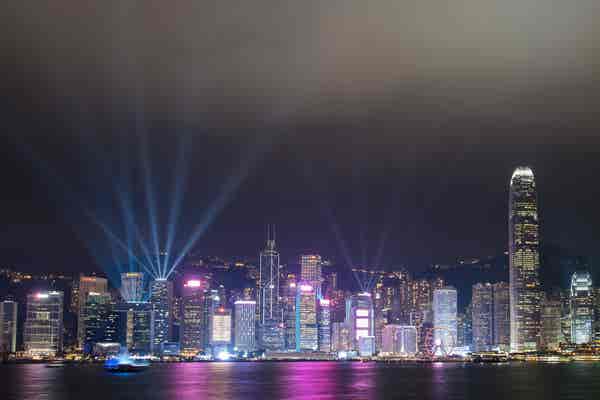 A Symphony of Lights in Hong Kong illuminates Victoria Harbor.CreditKeith Tsuji/Getty Images for the Hong Kong Tourism Board

Cribs are a big deal in Rome come Christmas time. In addition to the larger-than-life Nativity scene in St. Peter’s Square, you can feast your eyes on the remarkably detailed 18th-century Neapolitan carved-wood crib at the Church of SS. Cosma and Damiano by the main entrance to the Roman Forum, and visit the annual “100 Presepi” exhibition at the Sale del Bramante, Piazza del Popolo (open through Jan. 7), to see a crib with parts made of everything from coral to chocolate. 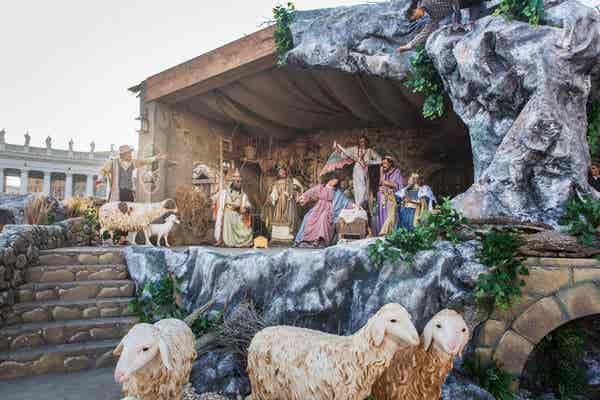 The Nativity scene in St. Peter’s Square at the Vatican.CreditGianni Cipriano for The New York Times

A lack of snow does not dampen the Christmas spirit in Sydney, whose annual “Sydney Christmas” festival is running through Dec. 26. One great (and free) way to soak up the holiday is to take this Dec. 21 walking tour of George Street, which promises “the most Instagram-able window displays and illumination.” One perk that these other destinations do not have: Warm, sandy beaches that lie just minutes from downtown, where the natural beauty of Australia’s most populous city will be waiting. 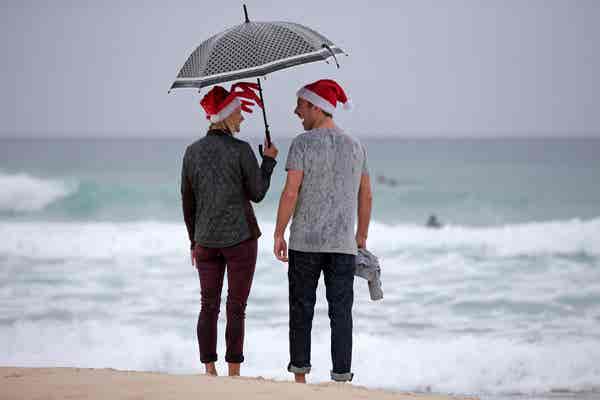 Quebec City has long drawn admirers to its historic district — the famed ramparts, quaint cobblestone lanes and handsome stone houses. This area transforms into a scenic Christmas village each December. The 403-year-old capital of Quebec revels in the outdoors at Christmastime, when stone buildings sparkle with lights. Consider a toboggan down the steep wooden tracks of the Dufferin Terrace Slides in front of the castle-like Fairmont le Château Frontenac, cross-country ski on the Plains of Abraham, or skate at the Place d’Youville rink. 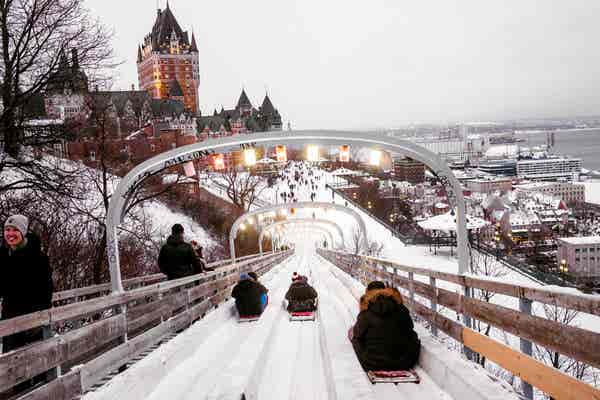 A toboggan ride heading toward the Fairmont Le Château Frontenac.CreditRenaud Philippe for The New York Times

Edinburgh, a charismatic city full of staircases and hills festooned with Georgian and neo-Classical buildings, is well-versed in incorporating the modern into the old. This is evident come winter, when Scotland’s capital puts on a six-week festival lasting until Jan. 6 that goes way beyond Christmas markets. You can ride roller coasters, climb a wall of ice and attend a racy Christmas-themed show by the cabaret troupe La Clique. 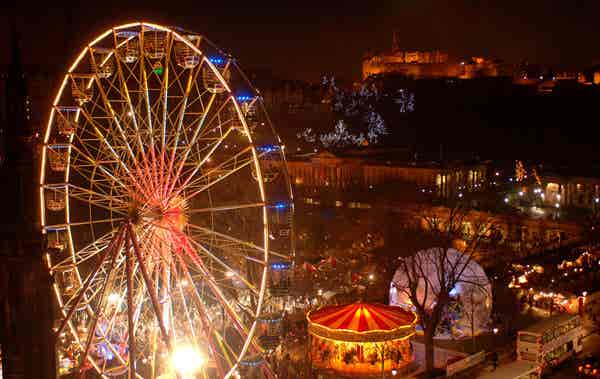 Some of Edinburgh’s Christmas festivities on Prince Street.CreditChris Warde-Jones for The New York Times