May 29, 1919: The animated story of how Eddington’s historic eclipse expedition confirmed relativity, catapulted Einstein into celebrity, and united humanity 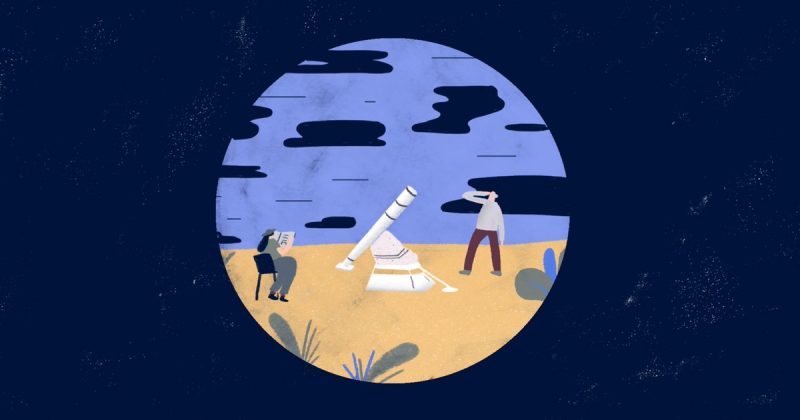 On May 29, 1919, the young English astronomer Arthur Eddington (December 28, 1882–November 22, 1944) catapulted Albert Einstein into celebrity by proving the most significant scientific model of the universe since Newtonian gravity: the general theory of relativity, completed four years earlier.

For a quarter millennium, Newton’s conception of space as static and absolute had gone unquestioned. According to his instantaneous-action-at-a-distance theory, gravity is a force that, like magnetism, acts through space but not on space, and light travels only in straight lines. According to Einstein’s theory, space and time are one entity — the foundational fabric of the universe — and gravity is a force caused by spacetime: Massive objects don’t merely draw small objects with their gravitational pull but bend the fabric of spacetime itself with their mass, pulling smaller objects into the depressions and bending light along the curvature.

At a time when very few scientists considered relativity plausible, and very few Englishmen would risk their reputation by defending a German’s ideas, Eddington set out to test Einstein’s theory against reality in an ingenious experiment nature herself had furnished. With his small team, he traveled to the remote island of Príncipe off the western coast of Africa to observe the longest total solar eclipse — 6 minutes and 51 seconds — in five centuries. When the Moon curtained the sun, Eddington hoped to see light of the Hyades cluster positioned directly behind the sun from Earth’s vantage point. If Einstein was right and Newton wrong, the sun’s massive gravitational field would warp spacetime itself, bending the path of the light to make it visible from Earth. The Hyades starlight would thus be deflected from its baseline nighttime position, which Eddington had recorded several months earlier.

It was an incredibly ambitious endeavor, both conceptually and practically. After days of heavy rains and overcast skies, resigned to failure, Eddington and his crew watched in awe as the clouds parted just in time for the eclipse, clearing the way for the telescope they had hauled to their cliffside encampment. As totality swept its otherworldly veil over the island, they took several photographic plates. All but two were ruined by the crude technology — but in those two, the Hyades clearly speckled the side of the Sun, matching Einstein’s theoretical prediction and disproving Newton.

One of Eddington’s photographic plate negatives.

“Dear Mother, joyous news today,” Einstein wrote upon receiving word of the triumphant results, which revolutionized our understanding of the universe and shaped the course of modern physics. “New theory of the universe,” the London Timessoon proclaimed under the heading REVOLUTION IN SCIENCE, “Newtonian ideas overthrown.”

The scientific triumph was also a heartening, humane moment — just after the close of World War I, a pacifist English Quaker, who had refused to be drafted in the war at the risk of being jailed for treason, and a pacifist German Jew united humanity under the same sky, under the deepest truths of the universe. It was an invitation to perspective in the largest sense — one to which the third annual Universe in Verse was dedicated.

In this lovely short film, animated by English artist Hannah Jacobs and produced by Massive Science, astrophysicist, author, and my Universe in Verse co-conspirator Janna Levin elucidates the science behind the historic expedition and contextualizes the triumph of relativity, the legacy of which animates her sublimely beautiful book Black Hole Blues.

Eddington, unlike some of his compatriots, had no urge to denigrate Einstein’s accomplishments, although he was a citizen of a country so recently a bitter enemy — Einstein, born in Germany, and Eddington, in England. Out of the shadow of the War into the shadow of the Moon, they were citizens of the same Earth and relativity was heralded as one of humanity’s greatest achievements.