Pool: A Tender Illustrated Celebration of Quiet Curiosity and How We Find Our Kindred Spirits 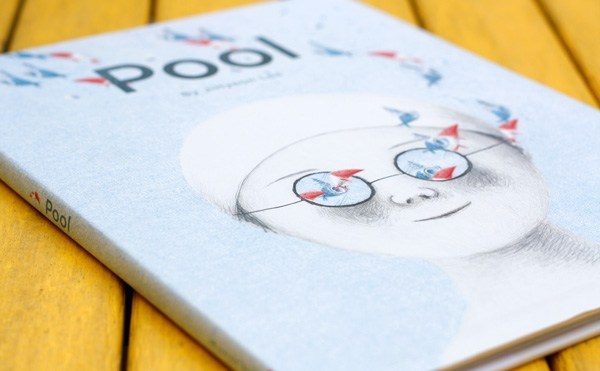 What our hunger for connection has to do with Borges’s imaginary beings.

A century and a half after Lewis Carroll plunged his Alice into a fantastical world through the looking-glass, South Korean fine artist and illustrator JiHyeon Lee offers a magnificent modern counterpart in her picture-book debut, Pool (public library) — a wordless masterpiece of space, scale, and silence converging to create an underwater world of wonder just beneath the reflective surface of ordinary life.

Lee’s delicate yet immensely expressive pencil illustrations, partway between Sophie Blackall and mid-career Maurice Sendak, emanate childhood’s tender trepidations and the gentle playfulness at the heart of the story.

We meet a boy standing poolside, looking reluctantly at the boisterous crowd lurching into the annual invasion of the public pool — a noisy, chaotic scene Lee communicates with great subtlety and quietude.

Perched on an uncrowded corner of the pool, the boy hesitantly contemplates the prospect of plunging.

At last, he takes the leap and dives below the superficial clamor of the crowd, where he encounters his unexpected counterpart — a little girl propelled by the same shy curiosity.

Together, they dive even deeper and the pool suddenly transmogrifies into a whimsical underwater wonderland full of strange and beautiful creatures — a magical mashup of the ocean’s most glorious real-life inhabitants, the mythological marine deities of ancient folklore, and Borges’s imaginary beings.

Suddenly, they come upon a most magnificent sight.

With a mastery of pacing time through negative space, calling to mind Marianne Dubuc’s exquisite The Lion and the Bird, Lee paints a visual gasp as the two children find themselves facing a gentle giant — a peculiar being reminiscent of our planet’s largest real creature (the subject of another spectacular picture-book), only white and furry.

They peer into its giant eye, into its enormous otherness, not with fear but with affectionate awe — a sweet and subtle reminder that, as Neil Gaiman memorably put it, “behind every pair of eyes, there’s somebody like us.”

As the two make their way back to the surface, that watery looking-glass through which they had plunged into a modern-day Wonderland, they exit the pool from the other end, somehow transformed; the clamorous crowd, having completed this annual chore, leaves the same way it had flounced in.

And then, as they take off their goggles, they peer into each other’s naked eyes to find in the otherness an affectionate sameness of spirit peering back.

Pool is wonderful beyond words from cover to cover. Complement it with another wordless masterwork: Marla Frazee’s The Farmer and the Clown.