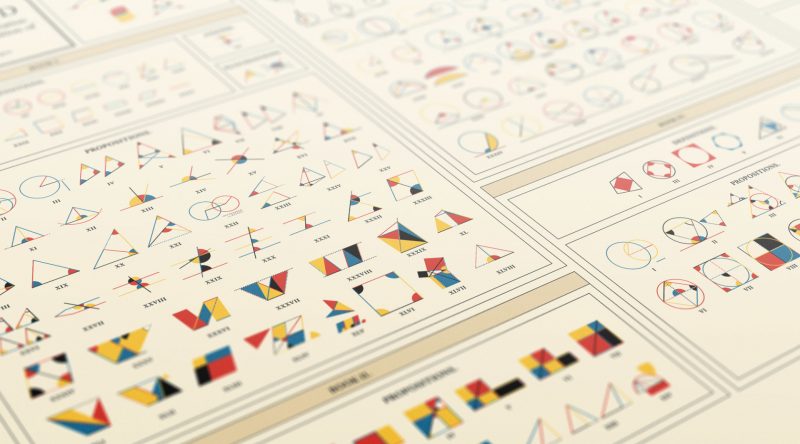 When he’s not working as a web designer, Nicholas Rougeux delights in interpreting data visually. His latest creation is a celebration of Byrne’s Euclid. The book, created in 1847 by Irish engineer Oliver Byrne is fully titled The First Six Books of the Elements of Euclid in which Coloured Diagrams and Symbols are Used Instead of Letters for the Greater Ease of Learners. It illustrated parts of Euclid’s Elements, which the Greek mathematician is credited with writing in 300 B.C. The thirteen-book collection established geometry, number theory, and other core concepts still in use today.

For Rougeux’s version, the designer carefully reproduced each colorful, eye-catching design with geometric accuracy, and arranged and labeled them as they appear in Byrne’s book within the framework of a scaleable poster. The poster can be ordered in a variety of sizes via Rougeux’s website.

You can learn more here about Rougeaux’s painstaking process of translating the 172-year-old book into a contemporary print. See more of the Chicago-based designer’s data-driven creations, ranging from weather portraits of U.S. cities to an interpretation of Werner’s Nomenclature of Colours, on Behance. A Winter Walk with Thoreau: The Transcendentalist Way of Finding Inner Warmth in the Cold Season