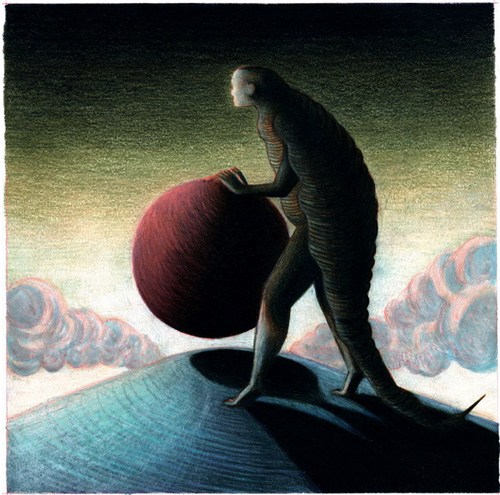 A graphic novel “meant to be heard in the mind.”

Over the past century, illustrations and riffs on Edgar Allan Poe have ranged from Harry Clarke’s stunning 1919 illustrations to today’s parodic Amazon reviewsand literary action figures. But our era’s most exquisite take on the beloved poet comes from none other than the late and great Lou Reed. In 2003, he endeavored to set Poe’s most famous stories and poems to music, unleashing his legendary composer-lyricist magic on an album that was part tribute, part remarkably inventive interpretation of Poe’s literary legacy. Alongside the record came the eponymous graphic novel The Raven(public library) — Reed’s collaboration with legendary Italian cartoonist and artist Lorenzo Mattotti, whose mesmerizing crayon pastel illustrations amplify the dark whimsy of Poe’s poetry and infuse it with the defiant eroticism of Reed’s lyrical adaptation.

Prefacing Mattotti’s art and the cast of characters is this beautiful note from Reed on how the graphic novel is intended to be read:

This is the work for the imagination; therefore I have included only audio clues, as this version is meant to be heard in the mind.

Here’s Reed’s rewrite of “The Raven”:

Once upon a midnight dreary
as I pondered, weak and weary
over many a quaint and curious
volume of forgotten lore
while I nodded, nearly napping
suddenly there came a tapping
as of some one gently rapping
rapping at my chamber door
“‘Tis some visitor,” I muttered
“tapping at my chamber door
only this and nothing more.”
Muttering I got up weakly
always I’ve had trouble sleeping
stumbling upright my mind racing
furtive thoughts flowing once more
I, there hoping for some sunrise
happiness would be a surprise
loneliness no longer a prize
rapping at my chamber door
seeking out the clever bore
lost in dreams forever more
only this and nothing more
Hovering my pulse was racing
stale tobacco my lips tasting
scotch sitting upon my basin
remnants of the night before
came again
infernal tapping on the door
in my mind jabbing
is it in or outside rapping
calling out to me once more
the fit and fury of Lenore
nameless here forever more
And the silken sad uncertain
rustling of the purple curtain
thrilled me, filled me
with fantastic terrors never felt before
so that now, oh wind, stood breathing
hoping yet to calm my breathing
“‘Tis some visitor entreating
entrance at my chamber door
some lost visitor entreating
entrance at my chamber door
this it is, and nothing more.”
Deep into the darkness peering
long I stood there
wondering fearing
doubting dreaming fantasies
no mortal dared to dream before
but the silence was unbroken
and the stillness gave no token
and the only word there spoken
was the whispered name, “Lenore.”
this I thought
and out loud whispered from my lips
the foul name festered
echoing itself
merely this, and nothing more
Back into my chamber turning
every nerve within me burning
when once again I heard a tapping
somewhat louder than before
“surely,” said I
surely that is something at my iron staircase
open the door to see what threat is
open the window, free the shutters
let us this mystery explore
oh, bursting heart be still this once
and let this mystery explore
it is the wind and nothing more
Just one epithet I muttered as inside
I gagged and shuddered
when with manly flirt and flutter
in there flew a stately raven
sleek and ravenous as any foe
not the least obeisance made he
not a minutes gesture towards me
of recognition or politeness
but perched above my chamber door
this fowl and salivating visage
insinuating with its knowledge
perched above my chamber door
silent sat and staring
nothing more
Askance, askew
the self’s sad fancy smiles at you I swear
at this savage viscous countenance it wears
Though you show here shorn and shaven
and I admit myself forlorn and craven
ghastly grim and ancient raven
wandering from the opiate shores
tell me what thy lordly name is
that you are not nightmare sewage
some dire powder drink or inhalation
framed from flames of downtown lore
quotes the raven, “nevermore.”
And the raven sitting lonely
staring sickly at my male sex only
that one word
as if his soul in that one word
he did outpour, “pathetic.”
nothing farther than he uttered
not a feather then he fluttered
till finally was I that muttered as I stared
dully at the floor
“other friends have flown and left me
flown as each and every hope has flown before
as you no doubt will fore the morrow.”
but the bird said, “never, more.”
Then I felt the air grow denser
perfumed from some unseen incense
as though accepting angelic intrusion
when in fact I felt collusion
before the guise of false memories respite
respite through the haze of cocaine’s glory
I smoke and smoke the blue vial’s glory
to forget
at once
the base Lenore
quoth the raven, “nevermore.”
“Prophet,” said I, “thing of evil
prophet still, if bird or devil
by that heaven that bend above us
by that God we both ignore
tell this soul with sorrow laden
willful and destructive intent
how had lapsed a pure heart lady
to the greediest of needs
sweaty arrogant dickless liar
who ascribed to nothing higher
than a jab from prick to needle
straight to betrayal and disgrace
the conscience showing not a trace.”
quoth the raven, “nevermore.”
“Be that word our sign of parting
bird or fiend,” I yelled upstarting
“get thee back into the tempest
into the smoke filled bottle’s shore
leave no black plume as a token
of the slime thy soul hath spoken
leave my loneliness unbroken
quit as those have quit before
take the talon from my heart
and see that I can care no more
whatever mattered came before
I vanish with the dead Lenore.”
quoth the raven, “nevermore.”
But the raven, never flitting
still is sitting silent sitting
above a painting silent painting
of the forever silenced whore
and his eyes have all the seeming
of a demon’s that is dreaming
and the lamplight over him
streaming throws his shadow to the floor
I love she who hates me more
I love she who hates me more
and my soul shall not be lifted from that shadow
nevermore

In one of his last interviews, Reed discusses the challenges of making the album and the joy of his collaboration with Mattotti:

The trouble with Poe was that his language is so serious — the vocabulary — the words he’s using — some of those words were arcane when he used them — and then, architectural terms from Greece. And I, dutifully sitting there with the dictionary, looking all of this up and thinking, certainly, in a song or on the album I don’t want to have [things like this] in there — you can just as easily use a word someone knows what it means. … For him, great. For me, no. I spent most of the time translating them into English before even starting, but I couldn’t wait to rewrite “The Raven,” the poem. Mine is like a contemporary version of it, and we have a graphic novel out … illustrated by this great Italian artist, Lorenzo Mattotti. … Making things that are beautiful is real fun.

The Raven is exquisite to behold, both visually and lyrically. You can sample the album, which is an absolute masterpiece of literary adaptation, below: