From The Second Sex to The Beauty Myth: 10 of the best feminist texts 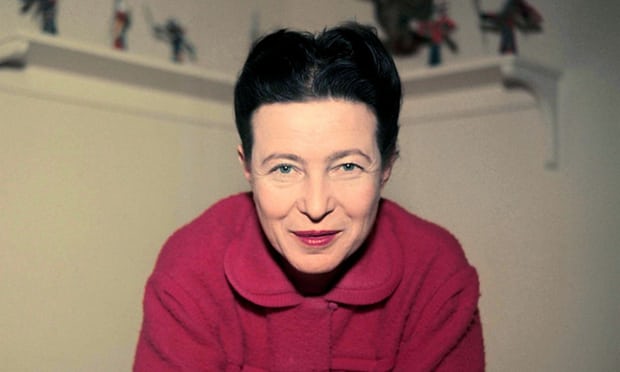 To ask what influence this book had on gender politics is akin to wondering what the sun ever did for the earth. The answer? Everything. Today, The Second Sex is still hailed as the mothership of feminist philosophy. “One is not born, but rather becomes (a) woman,” muses De Beauvoir (the quote varying, according to the translation). Exploring topics from sex, work and family to prostitution, abortion and the history of female subordination, De Beauvoir challenges the notion of men as the default (the ideal), and women as “other”. For many, The Second Sexrepresents not just key feminist reading, but rather essential feminist thinking and being.

The Feminine Mystique by Betty Friedan (1963)

This book was no mere pity-party for dissatisfied 1950s/60s Valium-gobbling US housewives. It was a call to arms, demystifying what became known as “second-wave feminism” for ordinary womenall over the world. Friedan also identified “the problem that has no name”, probing the lack of fulfilment in women’s lives – where everything “domestic” and trivial was deemed theirs, and everything important was “men only”. With a precision and defiance that still resonates today, The Feminine Mystique challenged the notion that, for women, anatomy was destiny.

Sexual Politics brought the fizz of iconoclasm to gender politics, tackling how women were routinely diminished and over-sexualised in literature and wider culture. Calling out the likes of Norman Mailer, Henry Miller and DH Lawrence, for what might be politely termed patriarchal/male dominant gender bias, and impolitely, literary macho dick-swinging, Millett set the benchmark for in-depth, no-holds-barred feminist critique. Her book remains relevant today because it encouraged readers to question not just the topics cited, but everything around them and tounderstand better how sexism could be systematically ingrained, culturally as well as politically. 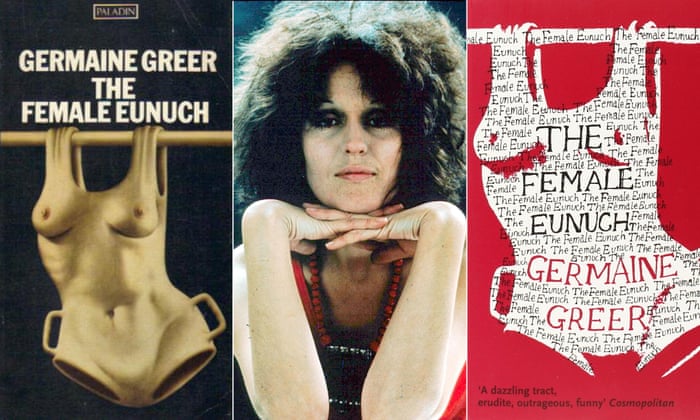 1970 and 2006 editions of The Female Eunuch, featuring the iconic cover art by John Holmes, and Germaine Greer photographed for the Observer magazine in 1970. Composite: Sandra Lousada for the Observer

The Female Eunuch by Germaine Greer (1970)

This work marked Greer out as a taboo-busting feminist punk, before punk was even invented. The tone was set by the provocative female body-suit on the cover, while the text counselled women to break free in all ways from male-prescribed gendered “normality”, including monogamy. The Female Eunuch remains a feminist classic and while truly a book of its time (women were advised to taste their menstrual blood), the author’s sabre-rattling intellect hasn’t dated.

Against Our Will: Men. Women and Rape by Susan Brownmiller (1975)

Anyone who cares about those who are raped, and how they are treated afterwards by society, owes a debt of thanks to Brownmiller’s book. A ground-breaking text on sexual assault, it correctly identified rape as a crime “not of lust, but of violence and power”, arguing against the widespread fallacy that those who were raped “deserved” it. Brownmiller’s book was widely credited with helping to transform the public view of rape globally, even influencing changes in law. More than 40 years since its publication, anyone who fights against the still-thriving culture of “victim blaming” is echoing the work of Brownmiller and Against Our Will.

Beyond the Fragments by Sheila Rowbotham, Lynne Segal, Hilary Wainwright (1979)

First a pamphlet, then a conference, then a book, with three authors, Beyond the Fragments applied “socialist feminist” ideologies to the complex problems of an unequal society. While some of the issues and terminology were very much of the era (it was updated in 2012), the book was highly influential, arguing for greater cohesion among disparate left-leaning groups. The text not only examined the relationship between women and the state, it also honoured the whole feminist experience, from the personal to the political, and back again. 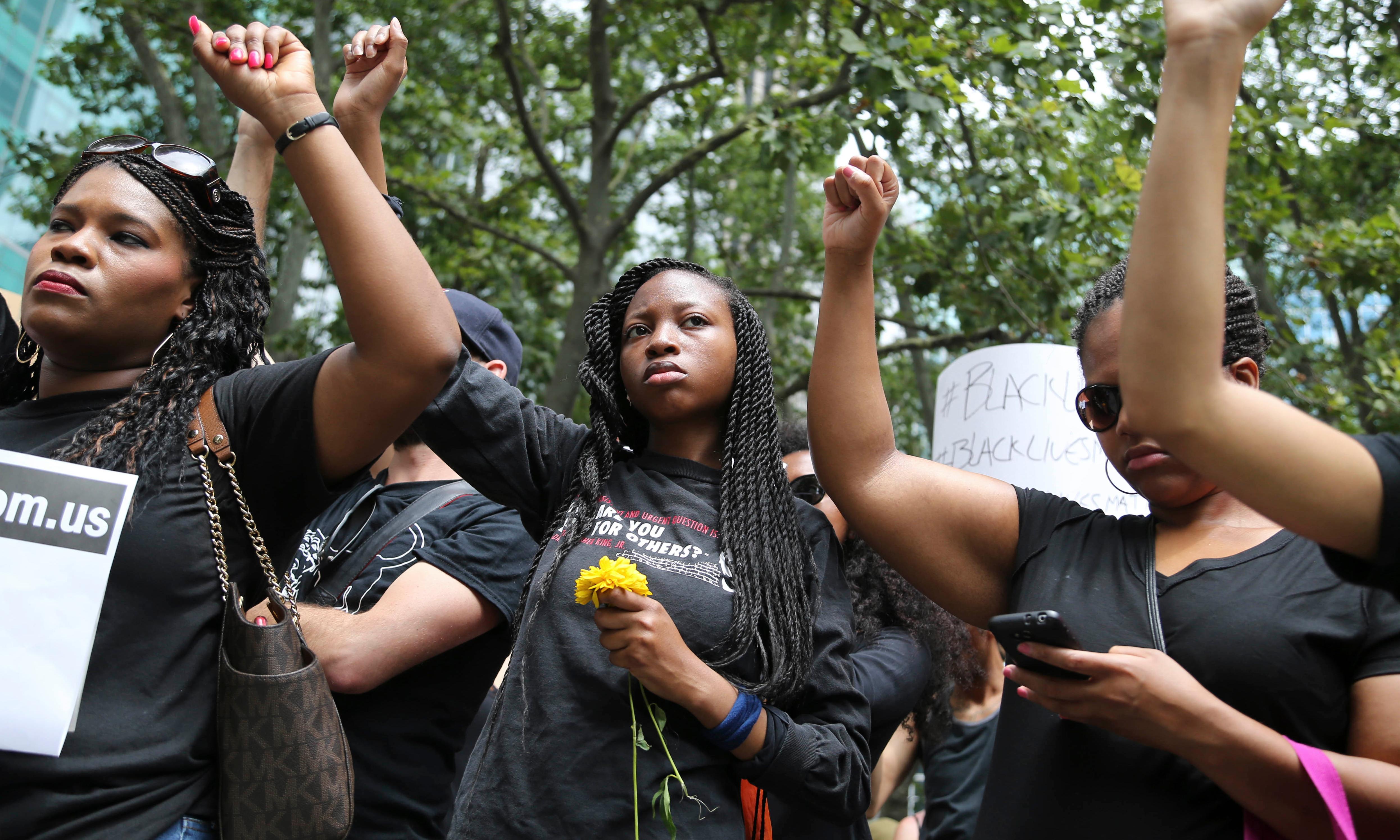 Protesters hold their fists in the air during a Black Lives Matter demonstration in New York on 10 July 2016. Photograph: Seth Wenig/AP

This text dealt with the socioeconomic, educational and sexual devaluation of black women. As evidenced by her other books, including Feminist Theory: From Margin to Center, hooks writes for all women, particularly the poor and marginalised. However, Ain’t I a Woman gave them a powerful voice at a time when they were barely heard, and when the idea of a black US First Lady remained about as feasible as a Martian president. With the book’s essence still infusing the spirit of modern movements such as Black Lives Matter, hooks is acknowledged as one of the most distinctive voices to emerge from feminist America.

As radical as other works by Dworkin, such as Pornography, Intercourse focused on how heterosexual sex was too frequently based on the subordination, “occupation” and degradation of women. (although the famous quote – that all heterosexual sex was rape – wasn’t explicitly made in the book). It further stereotyped Dworkin as a cartoon “man hater” in the public imagination, and her ideas may still be too strong for many. However, there could be no serious debate on matters such as sexual violence or consent without acknowledging the unflinching courage. and originality of her thinking. Arguably, Dworkin’s work is “feminist Ribena” – providing the concentrate to the mainstream dilution of now-accepted feminist thought.

Wolf’s work recognised the dark truth that however clever, funny and dynamic women might be, there was always something trying to make them feel bad about the size of their thighs. Worse, that this relentless external message (that a woman’s desirability was paramount)was internalising, and getting worse, even as modern women’s power and prominence outwardly increased. Wolf is viewed by some as controversial, sometimes inconsistent but her skilful analysis of female oppression (and the fact that they never really went away) makes The Beauty Myth all too relevant today.

Already viewed as a classic of fourth-wave feminism, Gay’s book examines race, weight, sex, gender, violence and popular culture. She blends the observational with the devastatingly confessional (Gay’s gang rape; over-eating). Her deceptively low-key writing style doesn’t mask her core message: in a contradictory world, the modern feminist is more useful being expressive and engaged than being rigidly “observant”.

In the Company of Women: Wisdom and Advice on the Creative Life from Beloved Women Artists, Makers, and Entrepreneurs