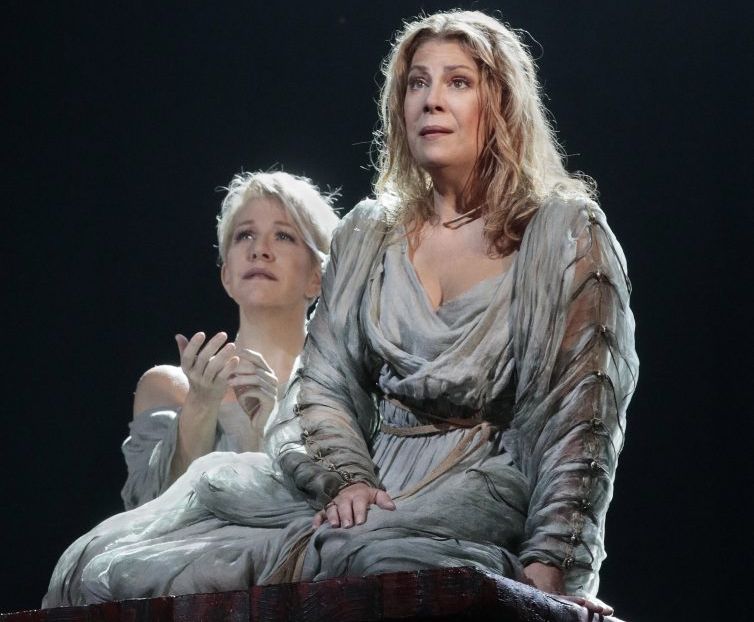 From the Metropolitan Opera of New York Transmitted live on October 7, 2017 at 19:55

“Ponselle, Milanov, Sutherland, Callas … after last night, Radvanovsky can add her name to the list,” declared the Huffington Post when Sondra Radvanovsky made her Met role debut as Norma in 2013. The 2017–18 season opens with a new production of Bellini’s masterpiece, starring Radvanovsky as the Druid priestess and Joyce DiDonato as her archrival, Adalgisa—a casting coup for bel canto fans. Tenor Joseph Calleja is Pollione, Norma’s unfaithful lover, and Carlo Rizzi conducts. Sir David McVicar’s evocative production sets the action deep in a Druid forest where nature and ancient ritual rule.

Gaul, 50 B.C.E. In a forest at night, the priest Oroveso leads the druids in a prayer for revenge against the conquering Romans. After they have left, the Roman proconsul Pollione admits to his friend Flavio that he no longer loves the high priestess Norma, Oroveso’s daughter, with whom he has two children. He has fallen in love with a young novice priestess, Adalgisa, who returns his love. Flavio warns him against Norma’s anger. The druids assemble, and Norma prays to the moon goddess for peace. She tells her people that as soon as the moment for their uprising against the conquerors arrives, she herself will lead the revolt. At the same time, she realizes that she could never harm Pollione. When the grove is deserted, Adalgisa appears and asks for strength to resist Pollione. He finds her crying and urges her to flee with him to Rome. She agrees to renounce her vows.

In her dwelling, Norma tells her confidante Clotilde that Pollione has been called back to Rome. She is afraid that he will desert her and their children. Adalgisa confesses to Norma that she has a lover. Recalling the beginning of her own love affair, Norma decides to release Adalgisa from her vows and asks for the name of her lover. As Pollione appears, Adalgisa answers truthfully. Norma’s kindness turns to fury. She tells Adalgisa about her own betrayal by the Roman soldier. Pollione confesses his love for Adalgisa and asks her again to come away with him, but she refuses and declares that she would rather die than steal him from Norma.

At home, Norma, dagger in hand, tries to bring herself to murder her children in their sleep to protect them from living disgracefully without a father. She changes her mind and summons Adalgisa, advising her to marry Pollione and take the children to Rome. Adalgisa refuses: She will go to Pollione but only to persuade him to return to Norma. Overcome by emotion, Norma embraces her, and the women reaffirm their friendship.

The druids assemble in the forest to hear Oroveso’s announcement that a new commander will replace Pollione. Oroveso rages against the Roman oppression, but tells the druids that they must be patient to ensure the success of the eventual revolt.

Norma is stunned to hear from Clotilde that Adalgisa’s pleas have not persuaded Pollione to return to her, and, in a rage, she urges her people to attack the conquerors. Oroveso demands a sacrificial victim. Just then, Pollione is brought in, having profaned the druids’ sanctuary. Alone with him, Norma promises him his freedom if he will give up Adalgisa for her. When he refuses, Norma threatens to kill him and their children and to punish Adalgisa. She calls in the druids and tells them that a guilty priestess must die, then confesses that she is referring to herself. Moved by her nobility, Pollione asks to share her fate. Norma begs Oroveso to watch over her children, then leads her lover to the pyre.