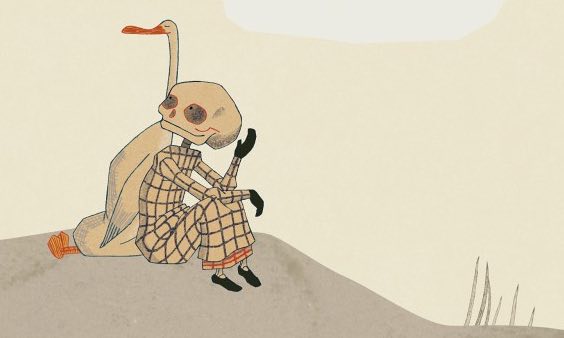 German illustrator Wolf Erlbruch has won the world’s largest cash prize for children’s literature, the Astrid Lindgren memorial award, honouring an entire body of work by an author or institution.

Erlbruch, who has been nominated for the award several times, is a much-venerated figure in children’s literature in Germany; his books often tackle difficult and dark themes in childhood. He was one of 226 candidates from 60 countries for the 5m Swedish kronor (£445,000) honour, which goes to work “of the highest artistic quality” featuring the “humanistic values” of the late Pippi Longstocking author. The jury called him “a careful and caring visionary” who “makes existential questions accessible and manageable for readers of all ages”.

Boel Westin, who chairs the prize, said: “He is expanding the limits of what the children’s book can be … He gives new perspective on both the art of picture books and the subjects that you can talk about in a book for children. He is a very honest illustrator.

“Just like Astrid Lindgren, Wolf has the capacity to talk about the difficult things in life, like death and so on, with warmth and without sentimentality. He doesn’t really care what you can do, he just does it. I think that is something he has in common with Lindgren.”

Born in 1948, Erlbruch began working in children’s books when a publisher saw some lions he had drawn for an advertisement. In 1985, his first book – illustrations for James Aggrey’s The Eagle That Would Not Fly – was published; he has since written 10 books and illustrated nearly 50 more by other authors.

Erlbruch, who combines different techniques – collage, pencil, chalk drawings and watercolour – is most famous for his illustrations in Werner Holzwarth’s 1994 picture book The Story of the Little Mole Who Knew It Was None of His Business, following a mole who discovers an animal has defecated on his head. The mole wears circular glasses strikingly similar to Erlbruch’s own. Some of his books contain autobiographical references, such as Leonard, the story of a boy who becomes a dog that was inspired by his son’s childhood fear of dogs. His son Leonard is now an illustrator himself.

Death is a reoccurring theme in Erlbruch’s books. His 2008 picture book Duck, Death and the Tulip is about a duck who is followed by Death, with the pair striking up an uneasy friendship as the duck asks questions of her pursuer. In her review for the Guardian, Meg Rosoff – last year’s winner of the Astrid Lindgren award – called it “extraordinary”, adding: “Erlbruch gives the impression that he is an artist incapable of sentimentality, but his drawings have a delicacy and a sweet humour that helps us cope with the immensity of the subject.”

At the ceremony in Stockholm’s National Library, the jury played the phone call in which Erlbruch was informed of his win. “Oh dear, oh dear,” said Erlbuch, when told who was calling, and chuckled when informed he had won the prize. “I am speechless, sorry.”

He said he felt he had witnessed a good omen earlier that day: “I went for a walk before and a young man on a bicycle came by and looked back to me, going up the hill. He said: ‘Thank you for your children’s books.’ It is strange, it is a good omen.”

Westin said she hoped the win would encourage English-language publishers to translate his books. “I would really hope so. He’s worth it,” she said. “More children should have more access to his books.”

The Astrid Lindgren memorial award was founded in 2002 by the Swedish government, and has been won in the past by Shaun Tan, Maurice Sendak and Philip Pullman. Erlbruch will be presented with the award on 29 May in Stockholm.

The central picture is from Duck, Death and the Tulip by Wolf Erlbruch. Making existential questions manageabl
Photograph: Wolf Erlbruch