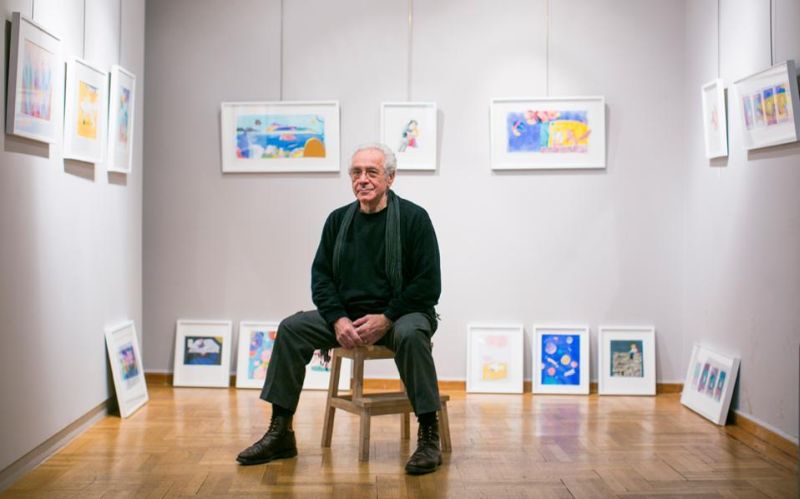 As the years pass and I grow older, I’ve noticed it’s very difficult to find people who have held on to their tenderness, whose eyes are playful and welcoming.

Every time I meet Alexis Kyritsopoulos, I remember that he belongs to this rare category of people and that his paintings stem from this charisma. We met on the occasion of his latest exhibition earlier this month on the first floor of the Skoufa Gallery, the theme of which was “The Little Prince” by Antoine de Saint-Exupery.

Warm pictures, gentle on the eye, which take us back to our childhood but also give us the courage to deal with a difficult reality. “How do I maintain the tenderness? By the skin of my teeth,” he says, laughing. “I don’t think one can talk about tenderness just like that. I think it has more to do with how you see the world, the things you like to share, how you handle life. We don’t feel tenderness for ourselves but for others, it is directed somewhere. I want to believe that for many of us there is a hunt for purity and truth that doesn’t wane. Within this context I reread ‘The Little Prince,’ which I had discovered as a student in Athens. It is not purely a children’s book. Many writers use children as an excuse to tell a story for adults. Not that children don’t have an affectionate side, but at the same time they do have a hardness and selfishness. As a child, I committed almost criminal acts!”

He continues: “Saint-Exupery created an emblematic case, a solitary being from a tiny planet who falls in love with a rose and befriends a fox. It allows you to reactivate your imagination because it describes the world using the Little Prince’s experience as a traveler of the universe. He looks at the Earth from above, takes you to the desert and distant planets. I think there are few literary heroes who have experienced such analysis beyond the book they star in.

“These images are so well established that many of my friends urged me not to deal with them.” Overcoming his initial hesitation, the painter decided to innovate, he says. He included not only included the Prince, the rose and the fox, but also the pilot, who plays the role of the narrator.

“I drew Saint-Exupery himself. After reading the book so many times, however, I believe that the relationship of the Prince with the flower is a reference to a heartbreak, while the fox and his domestication embody friendship,” says the artist, who made about 40 pieces for the recent exhibit – some with collage, but mostly watercolors and pastels.

Can this hero be relevant in a time of crisis? “I don’t know, but I have not looked at it from that perspective, to be honest,” the artist responds. “Every day the first thing we hear is how much of the national debt will be cut or how we’ll pay it off, while our question is how can we be creative in this situation on a practical and spiritual level. In a country where the education system is so bad, Saint-Exupery may not be very well known. Those who read in Greece have a personal impulse which they did not pick up in school. These are who the Prince accompanies.”

By Margarita Pournara, via