Why Is Holly a Symbol of Christmas? 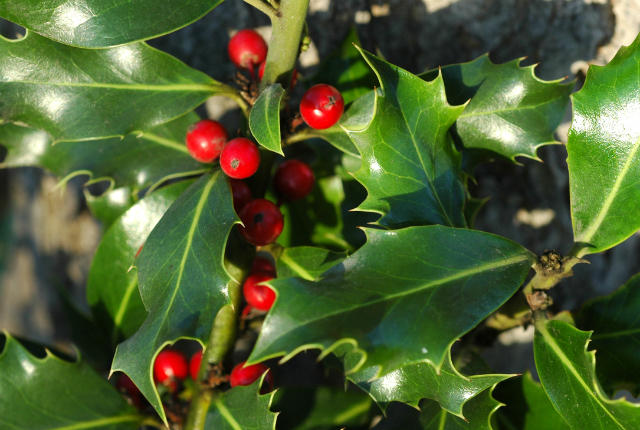 Santa Claus. A big ol’ red-and-white stocking hung by the fire. Nativity scenes. Most classic Christmas imagery is pretty self-explanatory. Then there’s the holly, genus Ilex, which found its way onto holiday cards through a more circuitous route.

Christmas is kind of the new kid on the block as far as holly symbolism is concerned. The hardy plant’s ability to stay vibrant through the winter made it a natural choice for pre-Christian winter festivals. The Roman feast of Saturnalia, celebrated at the darkest time of the year, celebrated the god of agriculture, creation, and time, and the transition into sunshine and spring. Roman citizens festooned their houses with garlands of evergreens and tied cheery holly clippings to the gifts they exchanged.

The Celtic peoples of ancient Gaul saw great magic in the holly’s bright «berries» (technically drupes) and shiny leaves. They wore holly wreaths and sprigs to many sacred rites and festivals and viewed it as a form of protection from evil spirits.

Christianity’s spread through what is now Europe was slow and complicated. It was hardly a one-shot, all-or-nothing takeover; few people are eager to give up their way of life. Instead, missionaries in many areas had more luck blending their messages with existing local traditions and beliefs. Holly and decorated trees were as good of symbols for new Christians as they’d been in their pagan days.

Today, some people associate the holly bush not with the story of Jesus’s birth but with his death, comparing the plant’s prickly leaves to a crown of thorns and the berries to drops of blood.

But most people just enjoy it because it’s cheerful, picturesque, and riotously alive at a time when the rest of the world seems to be still and asleep.

NOTE: Holly is as poisonous as it is pretty. Please keep it away from your kids and pets.

By Kate Horowitz, via